Home/
News/
How to survive in the digital age

How to survive in the digital age 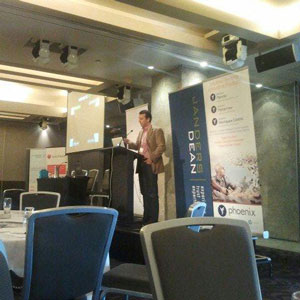 Law firms need to tap into the collective intelligence of consumers and outlearn their competitors to be successful in the future, a digital expert has claimed._x000D_

Law firms need to tap into the collective intelligence of consumers and outlearn their competitors to be successful in the future, a digital expert has claimed.

Steve Hallam (pictured), who leads Deloitte’s digital team in Melbourne, spoke on the topic of Professional Services in a Digital World at the Janders Dean Legal Knowledge and Innovation Conference (19-20 September).

“In the Industrial Age it was all about efficiency at scale. Today it is all about collaboration at scale,” he said.

Hallam said the ‘Age of Networked Intelligence’ has arrived and that law firms need to embrace the opportunities and overcome the challenges that it presents.

The future is here

Law firms are already facing tougher competition as technology has lowered barriers to entry and fostered the growth of disruptors.

“Transaction costs have gone down and information flows have gone up so people are able to enter into markets that they wouldn’t have been able to before,” said Hallam.

Technology has also changed the expectations of consumers, and law firms are finding it increasingly difficult to meet client demands.

An “on demand economy” has developed, where people expect an answer from professional services straight away, continued Hallam.

“They are just used to it. And if you take an hour, two hours, to respond, people get fed up.

“Supply chains are shortening … and the way we are providing services in that economy has to change.”

Another trend is the ‘unbundling of content’, which Hallam described as the “Apple effect”.

People are willing to pay two dollars for a phone app or a fixed price for a Netflix movie, but they are rejecting packaged deals, he said.

“It’s happening in professional services as well … People will come to you for specific things and leave the stuff that you probably would have made a profit out of. They will cherry pick the parts that they really want.”

Hallam said the digital revolution has flipped traditional marketing strategies on their head as consumers are now more willing to trust individuals than companies.

“I can see this infiltrating the legal profession. It’s moving from brand based trust to personal based trust,” said Hallam.

He said that the eBay thumbs up/thumbs down model of recommendations worked because people are more willing to trust a person on the internet they have never met than a CEO of an ASX 100 company, who may have a vested interest.

He said that law firms needed to capitalise on individual practitioners’ client relationships and encourage lawyers to create their own brand profile.

How do law firms succeed in this this brave new world?

The key, according to Hallam, is to draw on the power of “prosumers” – consumers who also produce value – to grow a business.

He cited Telstra, Lego Mindstorm, Kaggle (scientific research), Wikispeed (cars) and Goldcorp (mining) as examples of businesses that have outlearned their competitors by opening up their databases to the public.

This strategy is called ‘scalable learning’ and uses open source models that draw on collective intelligence to create products and compile and organise information.

He said that law firms of the future would crowdsource knowledge and collaborate with clients and external talent to create value.

“No matter how many smart people you have in your company, just realise that there are many many more outside,” he said.

“Winning is only temporary in any given space. You have to have that feedback loop and learn continuously,” he added.

How to survive in the digital age