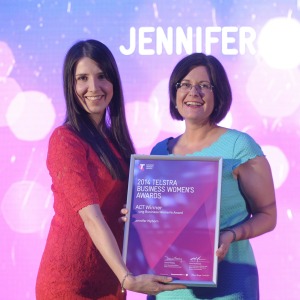 Clayton Utz partner Jennifer Wyborn told young female law graduates not to be scared by assumptions about gender in her acceptance speech for the Young Business Women’s Award last week.

“I really am exceptionally proud to stand here tonight because I think my story shows you can be a woman at a young age that doesn’t have to choose between career and family,” she said at the Telstra ACT Business Women’s Awards ceremony held in Canberra on 28 October.

Wyborn is the only female partner leading an employment, industrial relations and safety practice in Canberra. As a mother of two young children with a husband who acts as the primary carer, she is very aware that she is an exception in her industry.

Wyborn admitted she had personally experienced clients and colleagues doubting her abilities because she was a woman, but this had not stopped her building a successful practice.

Wyborn challenged the idea that being a lawyer necessarily means living life in six-minute units, spending long hours in the office and having no life outside of work.

“To female graduates I say: Your gender won’t stop you from achieving your dreams. Don’t be scared by the assumptions of what being a woman or being a lawyer means”

Throughout her career Wyborn has worked across the public and private sector. She led the employment, industrial relations and safety practice at Meyer Vandenberg Lawyers before moving to a new role at Clayton Utz in October this year.