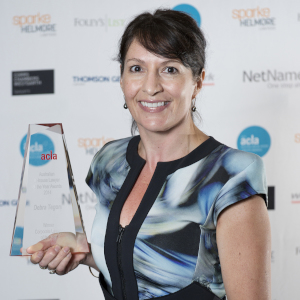 The head of legal at Crown has been named Corporate Lawyer of the Year at the annual ACLA In-house Lawyer Awards.

She beat a tough field of finalists in this category, including Steadfast Group senior corporate lawyer Duncan Ramsay, and Fiona Thompson, an associate general counsel at Suncorp.

While Thompson missed out this year, her team at Suncorp managed to snare the Legal Team of the Year (Large) Award. Bayer was awarded the same title in the Small category.

Another highly-anticipated award on the night was Government Lawyer of the Year, which went to Janean Richards, chief legal counsel and group manager at the Commonwealth Department of Social Services.

Richards was also a finalist in the Public Service category of the 2012 Lawyers Weekly Law Awards.

The two remaining ACLA awards were won by Grant Pritchard, legal counsel at Telstra, who picked up the Young Lawyer Achiever of the Year award; and Australian Government Solicitor, which was recognised for its corporate social responsibility program.

“We were overwhelmed by the number of nominations this year, the quality of each finalist and the winners are reflective of the high standard of professionals within the in-house legal industry,” said ACLA CEO Trish Hyde.