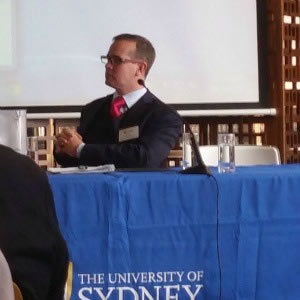 The swift construction of a legal framework to fast track the investigation of last year’s Malaysia Airlines crash is a rare example of bureaucracy and treaty law working well together, a top government lawyer has said.

“Although the [process] is usually regarded … as overly-bureaucratic, MH17 shows that treaty law, at least last year, made its mark and allowed governments to solve some pretty hairy problems, legally creating flexibility fairly swiftly,” John Reid (pictured) told the International Law Conference at the University of Sydney on February 6.

He pointed to Australia’s free trade agreements with South Korea and China as examples of how negotiations between nations can be drawn out over almost a decade.

Many believe that “bureaucracy plus treaty law means nothing will ever happen ever”, said Mr Reid.

However, the Malaysia Airlines crash raised numerous tricky international law problems, which were all resolved relatively quickly given the circumstances.

“The legal framework surrounding MH17 … isn’t just one treaty, it’s a whole raft of them — seven or eight instruments at last count.

“I think [MH17] shows the way that countries can use treaty law to overcome hurdles and to solve problems,” he said.

On July 18 last year, the flight from Amsterdam to Kuala Lumpur went down in eastern Ukraine, killing 298 people in total, including 38 Australian citizens and permanent residents.

The Dutch investigation has supported suspicions that the aircraft was brought down by high-speed objects, believed to be surface-to-air missiles launched by militants on the ground. The aircraft was following an uncontroversial flight path and was above temporary restricted airspace.

“The lawyers in the room begin to think about what the problems were that needed to be solved," he said.

A further complication was that the plane had crashed in what was effectively a war zone and there were very serious doubts about the safety and security of anyone, Ukrainian or otherwise, going into the area.

“So that was on 18th July. On 19th July things start happening around the world... The first significant movement is, quite appropriately, [within] the UN,” said Mr Reid.

Within four days of the crash, the UN passed Resolution 2166, which recognised the need to provide access and security measures for investigators in Ukraine.

There was also the issue of who was to be in charge, since a number of countries were keen to lead the investigations, said Mr Reid.

Five days after the event, Ukraine delegated responsibility for the investigation to the Netherlands by way of a memorandum of understanding (MOU).

However, this agreement was not passed through Ukraine’s parliament until August 11 because “Ukraine helpfully had another coup” in which the standing prime minister was temporarily ousted.

“A really interesting curve ball was thrown late in the piece, which needed a bit of a creative solution,” said Mr Reid.