Home/
News/
Marriage equality: What Australia can learn from the US

Marriage equality: What Australia can learn from the US 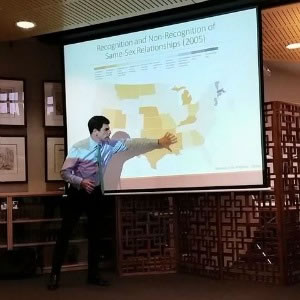 Proponents of same-sex marriage in Australia should study the legal arguments that brought about marriage equality in the majority of US states, a law professor says.

The arguments that have gained most traction in US courts are those that focus on the children of LGBTI couples, who are deprived of dignity by the state’s refusal to recognise their parents’ relationship, according to Professor Edward Stein (pictured) from Cardozo School of Law in New York.

“Somewhat surprisingly, dignitary arguments have proven effective [in the US] and are perhaps the most effective arguments… five or 10 years ago I would not have predicted that they would be the lead arguments,” Professor Stein said.

“In Australia, because of de facto relationships, same-sex couples living in a functional family context are able to get access to virtually the same rights and benefits that married couples are able to.”.

"While [this] may make the inequity hard to see, same-sex couples in Australia are treated with less dignity because they are denied an opportunity available to other couples.

“The quest for marriage equality in Australia can only benefit from emphasising this dignitary harm and showing its impacts on the lives of LGBTI people in Australia and their families.”

Professor Stein is the director of the Family Law, Policy and Bioethics Program at Cardozo and is a former Yale University philosophy lecturer.

The history of marriage equality in the US is one of aggrieved individuals bringing cases against state governments, Professor Stein said at the University of Sydney on March 12.

These efforts have provoked legislative backlashes, such as the Defense of Marriage Act 1996, which strictly defined marriage as a heterosexual union.

Through a series of independent legal battles, same-sex marriage advocates have challenged states to comply with the US Constitution’s statements on equality.

The result of this fragmented approach has been that 37 states have legalised same-sex marriage, while others continue to fight any changes.

In United States v. Windsor in 2013, the US Supreme Court found the lack of recognition of same-sex spouses in the Defense of Marriage Act was unconstitutional.

Unfortunately, in Australia a patchwork reform strategy may not be an option as the federal government seems to be the sole body with the power to change marriage laws.

This was tested in 2013, when the High Court ruled that the ACT’s same-sex marriage laws were inconsistent with the federal Marriage Act 1961.

Professor of Law at the University of NSW George Williams wrote in The Sydney Morning Herald that state and territory legislation drafted differently (without reference to federal laws) might be upheld by the High Court as the ACT decision indicated that there was nothing in the constitution barring gay marriage.

But even without a state by state strategy, Australians in favour of marriage equality can still take away something from the US struggle by integrating the most effective approaches into their legal campaigns, if they have not already done so.

For example, one key idea that arose in the US is that “separate but equal is not equal”, Professor Stein said.

“The fact that we have this institution, de facto relationships, that same-sex couples can enter and can get all the rights and benefits [of] different-sex couples … does not mean in fact that equality is satisfied,” he said.

In US states where civil unions or domestic partnerships afforded same-sex couples all the rights and benefits of marriage, the courts still found equality arguments convincing.

“Perhaps arguments like that could be helpful in Australia,” Professor Stein said, noting that cases made on the basis of sex discrimination have also persuaded US courts.

“The idea that it is impermissible sex discrimination for the state to prohibit a woman from doing something, namely marrying a woman, that a man can do ... has been embraced by some judges and has been helpful in some contexts,” he said.

He warned that sex discrimination had some disadvantages from a theoretical point of view and also said it has not been a winning argument for the US Supreme Court.

That US courts have started to reject classic arguments made by opponents of same-sex marriage is promising, he said. For instance, the once highly successful “unintended offspring” argument, which puts forward that the state has an interest in forging secure heterosexual unions for the purposes of procreation, has failed to sway judges.

That states are happy to issue marriage licences to infertile heterosexual couples but not to gay couples with children shakes the foundations of this argument, he added.

Same-sex marriage in Australia may still be a long way off; the senate is now set to debate the Freedom to Marry Bill but Senator David Leyonhjelm has said he will not put the bill to parliament until he is confident of success.

Marriage equality: What Australia can learn from the US