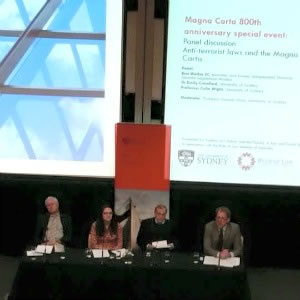 “There has been unfortunately too long a delay in the government making clear that they have no intention, surely, of departing from the model, which is already in Magna Carta and in the Australian Citizenship Act, whereby judicial power will determine whether something as terrible as stripping of citizenship will follow by way of punishment,” he said in an address at the University of Sydney on 4 June.

The Magna Carta is a charter enacted by King John of England on 15 June 1215, which states that a person may not be imprisoned, punished or prevented from returning home except by “the lawful judgement of his peers or the laws of the land”.

“You will not find there any reference to ministerial discretion,” said Mr Walker, wryly.

He said the principles laid out in the Magna Carta are important because they “command … assent of people otherwise of divergent political views”.

“They are things which … will gain well-nigh universal approval. That is that you would have to market yourself as an authoritarian tyrant … in order to dissent from it.”

Mr Walker is unconvinced by the argument that terrorism offences abroad are “very difficult to prove” and should therefore be decided by a minister.

“I’ve never yet heard – and Magna Carta surely sets [us] against the notion – that an offence difficult to prove is an offence you don’t have to prove.

“And [that] an offence that you cannot persuade 12 people unanimously [of] … is one you don’t have to persuade anybody of … except the minister on the basis of secret intelligence, which will not be tested or even seen by the person against who it is being recorded.

“Who cares less of what a minister, any more than what a bus driver, says [about whether someone is guilty of terrorism]?” he retorted.

He said that there are precedents for revoking citizenship, such as when a serious offence is committed in the period between applying and gaining citizenship or when an Australian citizen serves in the armed forces of another country. However, these have all traditionally been decided by the courts with ministerial discretion being used to mitigate punishment rather than inflict it.

Mr Walker described the push for new anti-terror laws as “the latest iteration of Australia’s obsession with being the country with a [category] of its own in the Guinness Book of World Records [for having] the most counter-terrorism laws in the world already”.

“There is something deeply affecting and in a sense sentimentally touching about the Australian faith that if you legislate things will be better,” he said.

“I have no idea how a boatload of convicts thought that the combination of legislating and the population’s addiction to law abiding would produce a happier place.

“We actually think passing laws will affect things on the ground. I don’t believe that. I tried in every one of my reports to suggest that the laws that really mattered to counterterrorism were those that funded surveillance ... police and prosecution.”

Mr Dutton has sent conflicting messages about whether ministerial powers will be subject to judicial review under the proposed laws. He has previously said, “The government’s not going to have the courts second-guessing ministerial decisions”.

This week he changed tack, saying the government “believe[s] very strongly in having judicial oversight” but that there needs to be a “common-sense application of the law based on all the facts available to the minister”.

There has also been confusion over whether the planned legislation could render people stateless, thus violating international law.

Dr Emily Crawford from Sydney Law School, who also spoke at the event, said that the proposed laws will affect those “eligible to apply for citizenship of another country, even if they don’t actually hold that foreign citizenship”.

“This could ensnare scores of people whose parents or even grandparents were born overseas, even if they themselves are second or third generation Australian born,” she said.