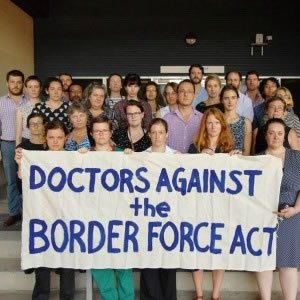 Lawyers have thrown their support behind 40 detention centre staff who signed an open letter to the federal government in defiance of new gag laws.

The letter, published on 1 July, criticises the provision of a two-year jail sentence for "entrusted persons" who make unauthorised disclosures of "protected information" regarding detention centres under section 42 of the Border Force Act.

This has been widely interpreted to include any information obtained by a person while working as an employee at a detention centre.

The signatories said the laws will restrict the ability of detention centre staff to speak out about the “deplorable state of human rights in immigration detention”.

The letter challenges the immigration department to prosecute signatories “so that these issues may be discussed in open court and in the full view of the Australian public”.

Australian Lawyers for Human Rights (ALHR) have endorsed the concerns expressed in the letter.

In the letter, detention centre staff said they are obliged under Australian law to report child abuse to child protection authorities.

However, the Border Force Act imposes penalties for unauthorised disclosure by detention centre workers, which they argue could include sharing knowledge of abuse. “If we witness child abuse in detention centres, we can go to prison for attempting to advocate for them effectively.”

ALHR is also “deeply concerned” by the continued pattern of bipartisan support for legislation that substantially and unnecessarily infringes on human rights, Mr Kennedy said.

“For the government to try to prevent the consultants – and many of them medical officers – from speaking out is very worrying in a modern democracy,” Professor Triggs said.

Australian Border Force Commissioner Roman Quaedvlieg, who was sworn in on Wednesday, said the laws were being “over-interpreted”.

He said he doubted that the signatories of the letter would be prosecuted.

“This is about the leaking of classified information that can compromise operational security or our sovereignty, it's not about people having a right to be outspoken in the community,” he said.

Under section 48 of the act entrusted persons may disclose protected information if they believe the disclosure is necessary to prevent or lessen a serious threat to the life or health of an individual and the disclosure is made for the purpose of preventing or lessening that threat.

The Public Interest Disclosure Act 2013 has similar protections for whistleblowers.

Below is the open letter addressed to Prime Minister Tony Abbott, Immigration Minister Peter Dutton and Opposition Leader Bill Shorten. It was signed by more than 40 current and former medical, educational and humanitarian detention centre workers on Nauru and Manus Island.

“Today the Border Force Act comes into force. It includes provision for a two-year jail sentence for “entrusted persons” such as ourselves if we continue to speak out about the deplorable state of human rights in immigration detention without the express permission of the minister for immigration and border protection. This strengthens the wall of secrecy which prevents proper public scrutiny.

We have advocated, and will continue to advocate, for the health of those for whom we have a duty of care, despite the threats of imprisonment, because standing by and watching sub-standard and harmful care, child abuse and gross violations of human rights is not ethically justifiable.

Evidence of the devastating effects of institutional self-protection and blindness to child abuse has been presented before the current royal commission. We are determined not to collude with a system that repeats these same mistakes.

There are currently many issues which constitute a serious threat to the health of those in detention for whom we have a duty of care. The Department of Immigration and Border Protection is aware of these problems and has for years failed to address them adequately.

We are aware that in publishing this letter we may be prosecuted under the Border Force Act and we challenge the department to prosecute so that these issues may be discussed in open court and in the full view of the Australian public.”