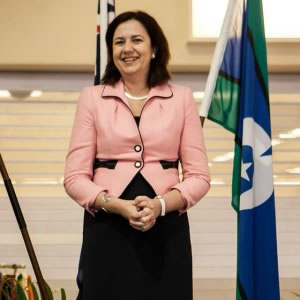 The Queensland government will trial a specialist court dealing with domestic and family violence, in response to a report indicating violence is on the rise.

The Not Now, Not Ever report handed down by domestic violence taskforce chair Governor-General Quentin Bryce found Queensland police reported 66,000 incidences of domestic violence in 2013-2014, versus 58,000 in 2011-2012.

Premier Annastacia Palaszczuk (pictured) announced the trial of the new court, as recommended by the report, would commence in September at Southport on the Gold Coast.

“We know that to put in place a specialist domestic violence court will help women who go through this journey,” she said.

Southport was chosen due to its high incidences of domestic violence, Premier Palaszczuk said.

Local family lawyer Michael Kilmartin from Adams Wilson Lawyers, who has been lobbying for a specialist court for a decade, applauded the move but warned more needed to be done.

“At present the Federal Circuit Court (family law division) only sits in Southport once every two months. This is unacceptable,” he said. “The FCC at present is very Brisbane centric.”

He called for Southport to be given its own resident Federal Circuit Court judge and Commonwealth registry.

He also suggested magistrates be provided with specialised training around domestic violence.

“We don’t just want the protection order to become a rubber stamp, and likewise for the magistrate to defer other issues on the basis that it should be dealt with in the family court,” he said.

“If gay couples separate or become entangled in domestic violence issues, we don’t seem to have a proper legal support network in place to help them,” he said.

“If we are going to push to legalise same-sex marriage then there needs to be some funding to set up a proper support infrastructure to help when gay relationships fail,” he said. “The most urgent need is adequate domestic violence counselling for gays because the current system is focused on heterosexuals, and in particular around a concept where a husband assaults his wife.”