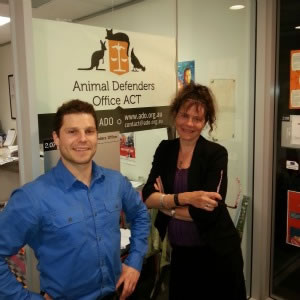 Australian law is “geared in favour of exploiting animals” but there are still ways to protect the interests of animals using the law, according to the Animal Defenders Office.

Tara Ward and Mike Rosalky (pictured) volunteer as directors at the Animal Defenders Office (ADO), a community legal centre based in the ACT, which opened in 2013.

“One of the reasons we are so passionate about this area is because once you start looking into the details of the legislation you realise how much exploitation is actually legalised,” Mr Rosalky told Lawyers Weekly.

“These laws actually facilitate egregious animal abuse. It really is an area of law which has a huge room to grow.”

Interestingly, animal law is the only area of law in Australia enforced by charitable bodies, the largest of which is the RSPCA.

“It is the only example where you have a private charity enforcing what are in effect criminal laws,” said Ms Ward.

This tradition stems from the first animal protection legislation, which was enacted in 1822 in England, before a police force was established.

This law, known as Richard Martin's Act, was a direct response to the cruelty occurring “literally under everyone’s noses” as cattle passed through the streets of London, according to Ms Ward.

English parliamentarian Richard Martin created the Society for the Prevention of Cruelty to Animals specifically to enforce the law. This is why Australia relies on private charities to protect animal welfare, even though this creates certain resourcing and accountability issues.

Animal law has progressed since then but it has not seen anything like the gains made in environmental law in the past few decades, according to Ms Ward.

“A few decades ago the idea of protecting the environment through law was regarded with scepticism,” she said.

“[People used to argue] ‘the environment is a thing – it doesn't have interests’. Where, of course, now it is taken for granted that the environment has interests that should be protected by law.

“So we regard animal law as being at pretty much at the same point that environmental law was several decades ago.”

ADO is focused particularly on using the law to protect animals but also hopes to open the public’s eyes to how the law actually treats animals.

“The term 'animal rights' is a misnomer,” added Mr Rosalky. “Animals do not have rights at all. Animals are considered property […] so essentially they are able to be treated however humans like, and in a lot of situations that results in horrific suffering.”

ADO has a team of volunteer lawyers that represent clients who have an interest in protecting animals.

The team often works in uncharted legal territory across diverse areas of law that intersect with animal law, including administrative law, property law, environmental law and wills and succession.

“Funnily enough when you delve into the world of animal, law you end up in areas of law that you might not [expect],” said Ms Ward.

The team represents a wealth of different clients from pet owners to individuals and organisations that have an interest in protecting animals.

Many of ADO’s volunteers are law students, which come to the organisation with, as Ms Ward puts it, “a few stars in their eyes” wanting to help animals through the law.

“Sometimes that we have to break it to them gently [that there are not many opportunities],” she said.

Animal law is still very much an “avant-garde” area, she said.

Mr Rosalky believes that interest in animal law will increase “as more and more lawyers learn about the horrific nature in which animals are legally able to be treated”.

He said he had no doubt that animal law would establish itself as a legitimate and important area of law and become the subject of significant government funding, creating more paid positions.