The dire need for extra funding for the courts and access to justice is a sticking point for the president of the Australian Bar Association, who says it is time for a new approach.

The new president of the Australian Bar Association (ABA), Will Alstergren QC, has earmarked a comprehensive review into how funding is allocated to the nation’s courts and community legal aid.

“There’s an appetite now to try and assist, and not just from the legal fraternity. Everything is on the table,” Mr Alstergren said.

Spurred by an impasse between legal stakeholders and the government over claims that groups such as community legal services face a funding cliff under present government funding arrangements, Mr Alstergren said it is time for the face-off to finish.

Last year the federal government released its official response to a landmark Productivity Commission Access to Justice Arrangements report. In response to 16 of the report’s 83 recommendations, the Commonwealth made a number of funding commitments, including $1.6 billion for legal aid commissions and community legal centres through the National Partnership Agreement.

A number of legal bodies, including the Law Council of Australia, National Legal Aid and the Law Society of Tasmania, said the committed funds fell nowhere near the annual $200 million injection that the Productivity Commission had flagged as immediately essential.

Mr Alstergren said the ABA intends to explore the viability of more creative funding solutions in a climate that deals with the fiscal realities constraining the state and federal governments.

The alternative funding arrangements being considered by the group include a legal foundation based on an English model, and the idea floated last year of a tax on the gambling and alcohol industries.

“The great thing about the ABA is that we’ve got some of the best legal minds in Australia, and particularly in relation to things like criminal cases,” Mr Alstergren said.

“At the same time, we’ll be relying upon and consulting with stakeholders in the area.”

The ABA president’s call for pragmatism, however, does not excuse respective governments of their financial obligations to justice. He said he wants change that is both sustainable and can facilitate the state better meeting its funding priorities.

“We should be finding alternate sources of funds and asking the government to match it dollar for dollar. We’ve got to turn the debate around a little bit,” Mr Alstergren said.

“I hope to continue Patrick O’Sullivan’s great work to further promote the availability and quality of Australian barristers, and to act as respected voice of reason and advocate for the wider community,” he said.

The ABA will also focus this year on promoting the value of independent counsel in modern litigation. 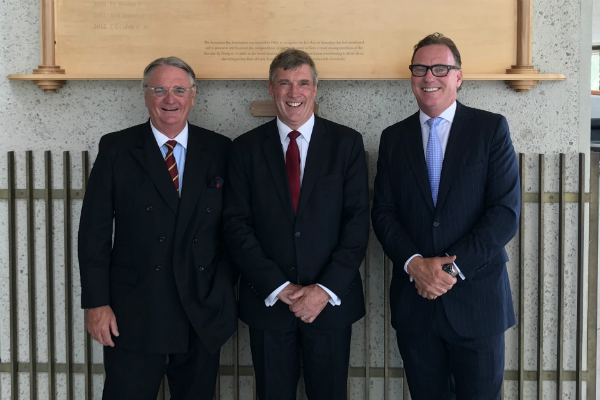