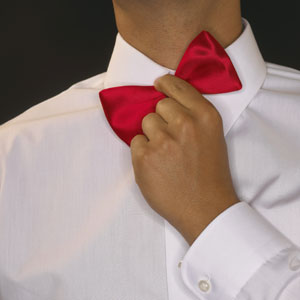 The embattled former chief executive of Barclays is being represented by Andrew Levander, a top white-collar defence lawyer with a penchant for bow ties.

Bob Diamond is one of more than a dozen current and former bank employees who have hired defence counsel as the London Interbank Offered Rate (LIBOR) scandal intensifies. Levander’s appointment is one of the most high profile.

Folklaw admits Levander’s resume is impressive – he is a partner at Dechert LLP, one of the biggest names in the defence bar in the United States, and he has represented high-profile clients, including the directors of Lehman Brothers Holdings.

But Levander is also known for his trademark bow ties.

Folklaw knows what you’re thinking; bow ties are the preserve of university professors, waiters and Winston Churchill. The rest of us avoid the accessory for fear of being called a ‘dandy’.

But these stereotypes may fade as the bow tie makes a comeback into mainstream fashion.

Richard Harvie, third generation of the Harvie family at the shirt and tie makers Harvie Hudson in the UK, said he has seen a significant increase in bow tie sales in the last two years.

“We are noticing an upturn in the sales of bow ties,” he said in a statement. “The neckwear seems to be enjoying a great renaissance.”

Turnbull & Asser, tie maker to the Prince of Wales, has also claimed that bow ties are flying out the door.

Tie-wearing TV heartthrobs could be responsible for the surge in sales.

Matt Smith, who plays the 11th Dr Who, has declared that “bow ties are cool”. Who could argue with a time traveller who saves civilisations? While Glee character Blaine Anderson’s bow ties have inspired a blog

Now that elegant accessories are back, Folklaw hopes politeness and chivalry will follow. Who knows, mass bow-tie wearing, with Levander as a poster boy for the legal profession, could change society for the better...