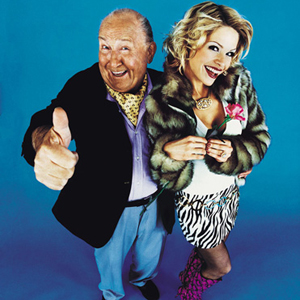 Reality TV stars are notorious for becoming embroiled in sex scandals – something a New York lawyer has discovered to his cost.

James Doyle, a 54-year-old lawyer who is based in Rochester, New York, was arrested earlier this week after he was discovered asleep at the wheel of a parked car at a rest area in New York state. He refused a field sobriety test and was charged with driving while intoxicated, patronising a prostitute and providing alcohol to a person under the age of 21, syracuase.com reported.

The ‘person under the age of 21’ who Doyle was in company with was Alicia Gustaferro, 20, who appeared on the tacky reality TV series Wife Swap, alongside her parents, in 2008. She is charged with criminal impersonation, prostitution and possession of a controlled substance.

She allegedly told police that both she and Doyle had been drinking prior to the arrest and that Doyle gave her a fake ID and bought her alcohol. The chatty Gustaferro also reportedly told cops that she had known Doyle for two years and that he calls her twice a month and pays her between $US500 and $US700 for sex.

Folklaw is just glad that, given her apparent chattiness, she didn’t reveal to police the reason why the price might vary...

Doyle has denied the charges, telling YNN he is a friend of Gustaferro’s family. He described the allegations as “lurid, salacious and demonstrably false” and said there “was absolutely nothing of a sexual nature with respect to our encounter”.

Gustaferro is no stranger to the courtroom. In 2010, she sued American TV network ABC and its parent company Walt Disney for $100 million, claiming they poorly represented her on Wife Swap as a “spoiled brat”. Gustaferro famously said on the show that she felt “sorry for people that are not gorgeous people”.

Hmmm. Folklaw wouldn’t hold out much hope of her winning that case...

Doyle has been arraigned and will appear in court next month in relation to the allegations. Gustaferro will appear at a later date.