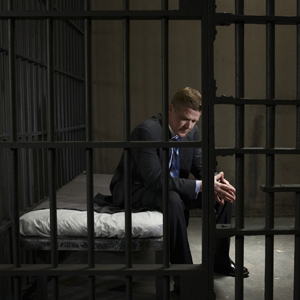 _x000D_ A US lawyer who stole more than $US10 million of clients’ money can look forward to having many years behind bars to think about what he’s done.

A US lawyer who stole more than $US10 million of clients’ money can look forward to having many years behind bars to think about what he’s done.

Douglas Arntsen, who was an associate at major US firm Crowell & Moring from 2007 to 2011, could face up to 15 years in prison when he is sentenced on Wednesday (17 October).

Staying true to his old self-interested ways, Arntsen, 34, bargained with prosecutors in return for his guilty plea, RollOnFriday reported.

Last September, Arntsen resigned from Crowell & Moring at about the same time as one of the firm’s clients noticed money was missing from an account Arntsen looked after.

Two days later, not suspiciously at all, Arntsen took a trip to Hong Kong.

Prosecutors accused Arntsen of leaving the country to dodge arrest, while his defence lawyer, Alan Lewis of Carter, Ledyard & Milburn, said he was merely taking a planned trip.

Arntsen was extradited back to the US at the end of last year to face a Manhattan courtroom and the usual prosecutor spiel about the “scared trust” between a lawyer and his client being broken - yet again.

His arrest warrant shows he committed two counts of grand larceny in the first degree and one count of scheming to defraud; stealing property valued at more than one million dollars.

He reportedly invested the money of two major clients in err… diverse areas, including chip machines, dry cleaners, and, in true hustler style, a few pricey meals and, predictably, strippers.

Crowell & Moring’s managing partner, Ellen Dwyer, said the firm was "pleased" with the guilty plea. Folklaw doubts the firm is as pleased that Arntsen is yet to repay the $US10.8 million he owes clients.

Reuters reports that colleagues thought Arntsen a hardworking, good-natured fellow and that his arrest came as a shock to the firm.

The ex-associate reportedly wore a dark jacket in court to reflect his mood, and did not make so much as a whisper, except to say "Yes, Your Honour" throughout the hearing.

Folklaw presumes he left the courtroom with his tail between his legs, ready to face the doghouse.