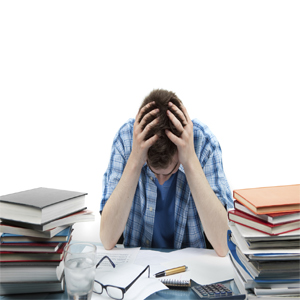 A first year corporate lawyer has described his typical long day at the office as a cycle of apathy, boredom and nervousness.

The young lawyer described document review as the “most boring experience of your life”.

Dense and confusing papers appear to have no relevance to any actual case, he told the Business Insider, adding that he finds it “strangely nerve-wracking” because he knows he’s messing it up, but just can't bring himself to care.

“You're probably going to mess it up even if you did care, so [screw] it, why even bother," said the anonymous fresh lawyer in a big New York law firm.

Despite the oversupply of law graduates, this one says his job is so bad he’s considering quitting in six months if it doesn’t get better. If he doesn’t die of boredom first, that is.

His deep-seated apathy toward corporate law extends to punctuality also. While some fresh law grads would be happy to burn the candle at both ends, this one says he rolls into the office no earlier than 9.30am, lacking any incentive to get there earlier given he’s usually stuck there until 6:30 or 7pm.

What’s the point in even getting there before 10:15 though? All he does until that time, he said, is check his email and surf the internet before being assigned “whatever meaningless task” for the day.

Folklaw hopes, for his sake, this firm doesn’t use automated time-billing software. Getting fired could offer an easy escape route though…

More than a growing disillusionment with law, the kid could also be at risk of malnutrition.

He told the Business Insider that he never cooks and never even buys food anymore because he’s never in his apartment.

It’s not for lack of funds that his fridge is bare though. The lawyer admits to being paid “an absurd amount of money” to just sit there and do nothing half the time.