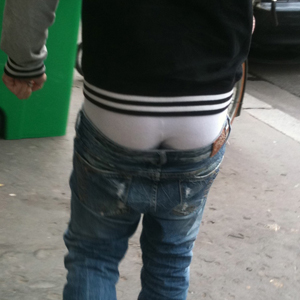 One American town has finally had enough of one particular crime against fashion.

Louisiana’s Terrebonne Parish Council is so sick of people wearing saggy pants that it passed an ordinance last week banning the wearing of the baggy trousers.

According to the website WWLTV, fines will be imposed on anyone who wears pants below the waist in public that expose underwear or what police and the courts determine to be too much skin.

Under the law, violators would be fined $50 for the first offence, $100 for the second offence and face a $100 fine and 16 hours of community service for third and subsequent offences.

Now, Folklaw understands that being forced to admire other people’s underwear choices while you’re innocently going about your business is unpleasant, but there are plenty of other crimes against fashion out there and they haven’t yet been outlawed...

If Folklaw had the power it would bring in an ordinance against "crop-top wearing for those over the age of 15” and a law outlawing “the wearing of leggings as trousers”, but unfortunately our plan to take over the world looks unlikely to come to fruition anytime soon, so those laws remain a fantasy...

The ban was backed by all but one of the nine Terrebonne Parish Council members, and received some backing from the community.

WWLTV reported that the Terrebonne president of the National Association for the Advancement of Colored People (NAACP), Jerome Boykin, said: “There is nothing positive about people wearing saggy pants.”

However, resident Ida Moore said that, while the baggy pants looked “foolish, unattractive and unbecoming”, they shouldn’t be illegal.

“It’s certainly not the first time elders complained about the social mores and dress habits of young people,” Moore said. “But to make laws governing social differences is a slippery slope to the level of government that we do not allow.”

Moore makes a good point folks, imagine if the government had tried to ban the ‘young people’s clothing’ of the miniskirt and bikini back in the ’60s, the face of fashion would be different today!

Folklaw reckons the baggy pants brigade should be allowed to continue making their fashion statement – photos of how ridiculous they look will surely be enough to put any future generations off following the trend...

Are there any crimes against fashion you would like to see outlawed? Let us know by leaving a comment.