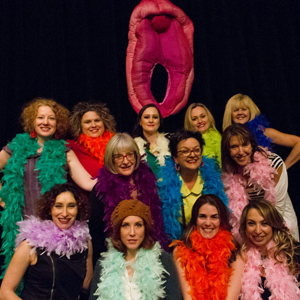 Last week I stood up in front of 504 people on a stage and talked about vaginas.

I put on a Southern accent, sang a couple of songs, wore a feather boa and performed monologues about a man who loved to look at vaginas, a raped village girl in Bosnia and a woman who worked as a prostitute for women.

And despite all this being completely out of my normal comfort zone, I am proud to say that I loved every minute of it.

Karen Abraham, a dynamic solicitor who works at RMIT, approached me and slyly asked if I knew any ‘legal performers’ who might want to perform in The Vagina Monologues (TVM) on 30 April.

Karen probably guessed that I was one of many lawyers who are frustrated performers. Too scared to apply to NIDA in our 20s, we enrolled in law degrees instead, and in doing so perhaps pleased our parents and staved off financial insecurity, but didn’t follow our hearts.

All for a good cause

Eve Ensler, a New York playwright and activist, wrote TVM in 1996. After interviewing more than 200 women about their sexuality and their lives, she created a witty, moving and emotional episodic play, which may only be staged according to certain rules.

Abraham had decided to stage TVM using only legal professionals. Her catchline was “we have a voice –let’s use it”. She planned to donate the funds raised to the Centre Against Sexual Assault, but as CASA primarily deals with women who are already victims of violence, it was decided that the funds raised would be put towards the organisation’s Secondary Schools Sexual Assault Prevention Program.

I had an unambiguously worthy cause, an enthusiastic producer and a tantalising invitation. Yet still I was hesitating. I was worried. What if a potential client Googled my name and ‘vaginas’ came up? Would that affect the briefs I would get or not get?

I asked Abraham to send me the script before I finally committed myself. Once I started it, I became more worried; I was born in New Zealand and we never talk about sex.

TVM is edgy writing about wetness, women pleasing women, rapes of girls, rape in war, sexual practices and blood, shit and hair. I stopped reading and signed up. I had to. Life is rushing past and we rarely get a chance to resurrect our youthful dreams. I will probably never be asked to perform in a play again and my two daughters, at 12, were horrified that a play was written about female genitalia. The name itself was enough to set them off. “It’s disgusting,” one said. “You’re a pervert,” the other declared. Their reactions just made me more determined to be part of TVM.

A troupe of eight was formed – all lawyers save for Dr Leslie Cannold, an ethicist. Moria Rayner, Beth Wilson, Helen McKelvie, Tanja Kovacs, Taboka Finn and Judge Liz Gaynor made up the group.

Abraham and her co-producer, Selina Allam, secured a director, Bridgette Burton, and a director’s assistant, actor Marissa Bennett. Those four women took our “sorry–ass, gentle, loving vaginas” [a line from the play] and made us into performers. Over seven weeks we worked two nights a week at rehearsals, learning our lines, a couple of songs, and a myriad of techniques to ensure our voices carried the emotions of the script.

Despite our busy lives, juggling our responsibilities as lawyers, mothers and daughters, we all made all the rehearsals. We were willing students and to be in the hands of Burton, an intelligent and graceful director, was a gift.

The joy of working collaboratively with such a vibrant, funny bunch of women was immense. For the last 17 years, I have worked alone.

Our two shows were a sell-out. In one night we raised $22,400 for CASA. I have had many conversations with my daughters, and with other women, about loving our lady bits. I have used my profession to make a small difference to the world, had an enormous amount of fun, and I have been brave. Sometimes the things we do to help others, end up helping ourselves more.