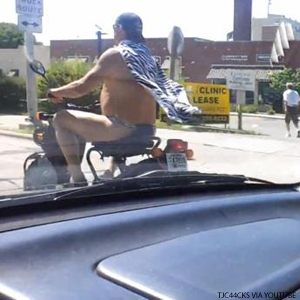 Folklaw has always wanted to write a story about someone called ‘Thong Cape Scooter Man’ – and now we can.

Folklaw has always wanted to write a story about someone called ‘Thong Cape Scooter Man’ – and now we can.

‘Thong Cape Scooter Man’is a minor celebrity in Wisconsin capital Madison for doing exactly what his name suggests – riding around town on a scooter wearing just a thong and a cape.

However, the Daily Mail reported that this rebel (seemingly) without a cause almost got into a spot of bother recently because he rode past a primary school just as children were leaving class.

Parents and teachers were decidedly shocked by the unusual sight of a 56-year-old man riding past wearing a thong, black cape with red trim, and a riding helmet (and nothing else), and immediately called the police.


Police called to the home of ‘Thong Cape Scooter Man’ following the incident and, according to the Daily Mail, the fashion maverick was most cooperative, apologised to the officers and said it was just an unfortunate coincidence that he passed by the school, on his way home from the mall, as children were leaving class.

However, concerned by the complaint, the police officers checked with the city attorney’s office to see if the man’s actions were illegal – and the office came back to say there was nothing illegal about it.

So, there is literally no law against riding around on a scooter in a thong and a cape. Brilliant.

Like all good superheroes, the true identity of ‘Thong Cape Scooter Man’ appears to be unknown, but it looks like his celebrity is on the rise.

A ‘Thong Cape Scooter Man’ Facebook fan page has more than 3000 likes and there are several videos of the free-riding free spirit on YouTube.

With the US summer officially underway now, Folklaw imagines there will be many further sightings of ‘Thong Cape Scooter Man’...