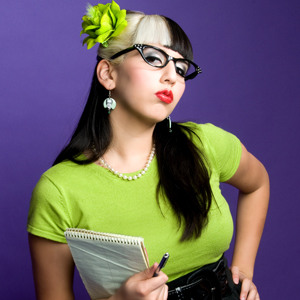 A judge in the US has come up with the adult equivalent of a schoolteacher making you write lines because you misbehaved in class...

North Carolina Chief District Court Judge Brenda Branch has instructed a woman who pleaded guilty to charges of resisting a public officer and being intoxicated and disruptive to write a two-page paper on How a Lady Should Behave in Public, the Roanoke Rapids Daily Herald reported.

The newspaper reported that 21-year-old Toni Marie King of Warrenton was arrested in February after, according to the arresting officer, she stole some beer and appeared to be intoxicated at a convenience store in the city.

According to a magistrate’s order filed about the incident, King also rudely insulted others by using profanity, and allegedly kicked the arresting officer and refused to get into the police car.

King pleaded guilty to charges of resisting a public officer and being intoxicated and disruptive in exchange for the dismissal of charges of assaulting a government official, larceny and possession of stolen goods, the Daily Herald reported.

As well as having to pen an essay on how to be a lady, King was also sentenced to 45 days in jail, suspended in favour of 12 months supervised probation, along with a substance abuse and alcohol assessment.

King was also ordered to pay a fine and court costs, and can’t possess or consume alcohol during her probation.

Folklaw thinks that this essay on being a ‘lady’ could definitely be interesting...