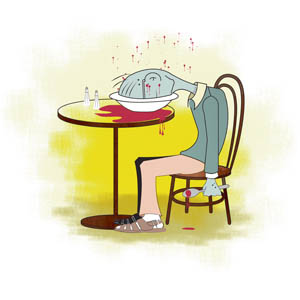 It’s the ultimate inconvenience – dying on holiday – but it might be a lot more common that you think. Voyager exclusively reveals what happens when your number’s finally up

The other mile high club

Last month, two people died on separate Qantas flights from Perth within hours of each other. One aviation insider explained to Voyager that while the deaths were completely unrelated, these kind of occurrences happen more frequently than you might think, leading to a new phenomenon known as “the other mile high club” the source said.

The most frequent course of action is for the deceased passenger to be buckled into their seat and have a blanket tossed over them. Not the most glorious ending to a life, especially once rigor mortis sets in.

A few years ago attendants on a British Airways flight were forced to move a deceased passenger to first class due to space limitations in economy, only to suffer a barrage of complaints from their big spending clients at the pointy end of the plane.

One passenger was reported as saying: “She kept slipping under the seatbelt and moving about with the motion of the plane. When I asked what was going on I was shocked to hear she was dead.”

“Some people will do anything to get an upgrade,” the insider quipped.

“Waiter! There’s a dead man in my soup”
The elderly love a coach tour through the Old Continent. But for the tour companies who steer their clients through Europe’s cobbled streets, a litany of twisted ankles, a bevy broken limbs and more tumbles than you’d see in a gymnast training centre can follow.

A tour guide from one of Australia’s leading luxury touring companies told Voyager: “Dealing with broken bones and hospitalised passengers is far worse than having a client die on your trip.

If a passenger dies then all you have to do is be sensitive, organise a coffin home and that’s all there is to it. Injuries require far more administration.”

On one occasion, though, sensitivity and secrecy were not an option. During a group dinner, with over 30 diners gleefully tucking into their starter, one elderly chap let out an loud groan, clutched his chest and fell face first into his tomato soup.

“Soup splashed over the guests; everyone stopped eating and stared at the old boy. It was like a scene from a bad movie,” said the guide.

All at sea-zure
Frequently referred to as floating cities, with everything you could ever want on land, cruises too are not immune to the icy hand of mortality.

In fact, deaths onboard cruise ships are so common that many have full blown morgues.

During a recent themed ballroom dancing cruise through the Pacific, one elderly couple were engaged in the foxtrot – albeit a slow version – when the husband suffered a heart attack and died on the floor. The bereaved widow took it all in her stride (pardon the pun) and reflected on the event stoically.

“Well, he would have loved to have gone that way. It was his dream.”

Each morning she would visit the onboard morgue to “have a cup of tea with him” before enjoying the remainder of her cruise.