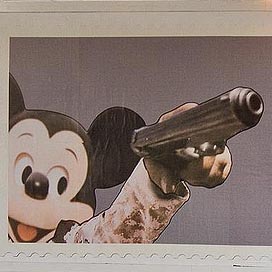 Do you get insurance every time you travel? It may be the preserve of the overly cautious but as these claims made to Allianz Global Assistance show, anything can happen. Here’s our pick of the top three:

America: We have all heard about the dangers of the New York subway and the joys of Disneyland. Combine the two and you get the curious case of a tourist who was held at gunpoint on the subway and robbed by a man in a mask. Make that a masked cartoon character, and the most unassuming of them all; a big-eared, split-grinned Mickey Mouse.

Once the police had established that the tourist was not in fact, taking the mickey, his costs were reimbursed.

Let’s set the scene: a couple saunters around a temple in Bali when calamity strikes and their bag is nicked. But the culprit is no masked and hooded criminal. It is a butter-wouldn’t-melt-in-my-mouth monkey. The opportunistic critter was so aggrieved by children who pursued him with enticements to exchange the bag for food that he swung the bag from a cliff top in a fit of petulance.

Happily, this couple had travel insurance and their costs were returned.

Let this cross between The Hunger Games and Wolf Creek be a warning to those who watch too many horror films. A similar plot unfolded on a hunting tour in North Queensland, in the tourists' minds at least. The couple started to feel uneasy and fled in a bout of paranoia, convinced that they as hunters had become the hunted - hunted by their tour guide.

Alas, this story does not end well, as their insurance company deduced that the couple were not in any real danger and refused their claim.

Do you have any tales of far-fetched insurance claims?

Let us know your experiences below.