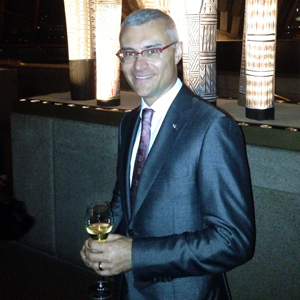 A partner at KPMG is waving the flag for wine-loving lawyers as the new champagne critic for French Living magazine.

A partner at KPMG is waving the flag for wine-loving lawyers as the new champagne critic for French Living magazine.

Francophile Matthew Stutsel (pictured), the national head of state taxation at KPMG, will write a regular column on champagne and French wine for the quarterly publication.

Speaking to Lawyers Weekly ahead of the French Living Garden Party to be held in Sydney's Hyde Park this Saturday (28 September), Stutsel confessed that he can’t exactly boast a strong line of French descendents.

“My great, great grandfather’s mother was French,” he revealed.

But Stutsel has proven that you don’t have to be French to take top honours in a champagne-tasting contest, winning the prestigious amateur prize at the Vin de Champagne Awards last year. He also earned the title of Ambassador of Champagne in Australia.

Having worked hard to make a name for himself as a champagne connoisseur, Stutsel said he was très excité to be offered the wine writing gig at French Living.

“[Champagne] is a passion of mine ... and this is a wonderful opportunity to write for an audience interested in something I love,” he said.

The rest is history

Stutsel isn’t the first lawyer to be seduced by a full-bodied Frenchy.

There is a long history of winemakers who also practised as lawyers, including American Nicholas Longworth, whose sparkling Catawba “transcends the Champagnes of France”, according to 19th century press reports. Closer to home, a trio of Sydney solicitors – James Halliday, Tony Albert and John Beeston – established Brokenwood winery in the Hunter Valley in 1970.

Being a lawyer and enjoying wine go hand in hand, said Stutsel. Lawyers have more disposable income than others and can afford to “get a bit more involved in the esoteric nature of wine”. A career in the law also demands a stress-relieving outlet like wine appreciation, he added.

Take Stutsel’s colleagues, who are taking full advantage of having a champagne critic on tap.

“When we go out for a drink they’ll often find out something about champagne that they didn’t know ... they enjoy it,” said Stutsel.

Some lawyers have all the luck...