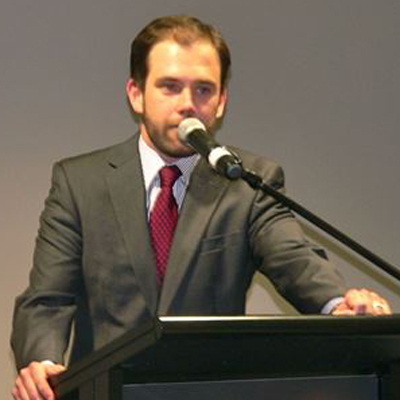 Folklaw has discovered the secret of the success of two-time Golden Gavel winner and Ashurst senior associate Mark McKechnie – he’s a comedian on the side.

Folklaw has discovered the secret of the success of two-time Golden Gavel winner and Ashurst senior associate Mark McKechnie – he’s a comedian on the side.

The Brisbane-based dispute resolution lawyer revealed to Folklaw that he is a member of comedy sketch group The Complete First Season.

“We all met at university,” McKechnie (pictured) told Lawyers Weekly. “The other people in the group all did law degrees as well, and we were in the University of Queensland Law Revue for a few years together, had a great time doing that, and thought there must be a way to keep that interest up while pursuing careers in law – so we have.”

The group performs regularly in Brisbane and recently had a sketch and musical comedy show in the Brisbane Fringe Festival.

McKechnie said he found the Golden Gavel to be a good way to combine his law career with his interest in comedy, which was one of the reasons he decided to enter again this year after being victorious at last year’s competition.

“It’s just good fun; I had a great time last year and was happy to do it again this year regardless of whether I go through to the National Finals or not,” he said.

McKechnie, who in the finals this year had to speak on the subject  Meet Judge Jetson and his Associate Elroy: Space courts of the future, said he gets his inspiration for his speeches, which entrants only have 24 hours to prepare, by taking everyday legal concepts and twisting them in an unusual or funny way.

“The audience are all lawyers themselves ... or have some interest in the law, so when you can take a concept that they might be using every day in the profession and then twist it in a way that will make them laugh that’s something that I enjoy doing.

“[I often include] some bad puns, which tend to go down pretty well on those sorts of nights,” he added.

Even though he was the defending champion, McKechnie still had to win the Queensland round of the competition to get to the Golden Gavel National Finals, with the topic he had to tackle there being ‘A T-rex stole my baby: Criminal law in prehistoric times’.

“The topics are always good fun and its quite challenging to stick within [them],” he admitted.

McKechnie said he was undecided about whether he would aim for a three-in-row by entering next year.

“I’ll see how I feel next time around,” he said. “There are a lot of very talented and funny speakers in Queensland that might have more fun having a shot at the title next year.”