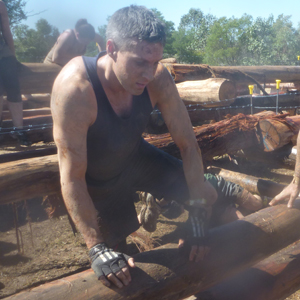 A Gilbert + Tobin lawyer has become the first blind person in the world to complete the Tough Mudder obstacle course challenge.

Fittler told Folklaw that he didn’t know when he decided to enter the event that, if he was successful, he would be the first blind person in the world to complete the 20km obstacle course.

“I’d no idea ... I had thought I might have been the first person in Australia but even that didn’t play on my mind. I was quite amazed; I would have thought someone else would have done it [before this],” Fittler told Folklaw.

Fittler said he decided to sign up for Tough Mudder in June for a number of reasons, including to motivate himself to keep hitting the gym, as an incentive to do some running – “not being able to see where I’m going meant I did a good bit of work on the treadmill” – and because “it’s there, it’s a challenge”.

Fittler signed up for the challenge with his personal trainer and they completed the course along with three other teammates; he also kept a blog about his experiences training for the event.

As well as increasing his running, Fittler also upped his food intake in the run up to the event – almost doubling what he was eating in the few weeks leading up to it.

“I was eating more than I ever have before and I lost three kilos of fat and gained a kilo of muscle,” said Fittler.

Hmm, perhaps Folklaw should sign up for Tough Mudder too.

Fittler said one of the things he liked about the event was the only person you’re really competing against is yourself.

“Having a team around me wasn’t unusual, or different, or specific for my needs, because everybody else was running along with their team and I was helping my teammates up and over obstacles as much as they were helping me.”

“One of them was the skateboard half pipe; [I didn’t know] how I was going to run up that incline and know when the right time was to grab the ramp or my team members’ hands; I knew it was going to be tough, and I was right.

“The first couple of times were pretty spectacular fails, but on the third attempt I managed to grab some arms and get up there, which was great.”

His legs cramping after the first 10 kilometres also lessened Fittler’s enjoyment of the day, as did the electrifying nature of the final obstacle.

“The very last obstacle had [streamers that conduct electricity] hanging down,” explained Fittler. “My plan was just to run straight through that ... but to stop people doing that they put rows of hay bales inside the obstacle. So, I had to walk through this area with my personal trainer and I got hit maybe four or five times that I remember, I lost count after that ... it was so bad.”

But, despite these challenges, four hours and 19 minutes after he set off, Fittler crossed the finish line, having completed the course in its entirety, and admitted he enjoyed heading for a beer and some grub after.

While he admitted on Tuesday (15 October) that his legs were still a bit “tender”, the challenges of the day haven’t put him off the possibility of tackling Tough Mudder again.

“I think if it wasn’t for my legs cramping and that very last electrical one, it could have actually been quite fun; so I think I probably will do it again.”