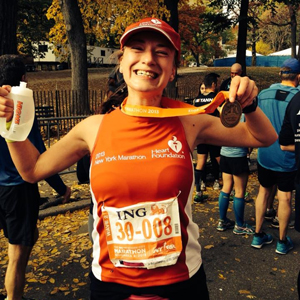 Wotton + Kearney’s Heidi Nash-Smith wanted a challenge, so she decided to complete her first marathon, as you do, in New York

I didn’t start off the year ‘marathon-fit’ – far from it.  Although I had previously completed three half marathons, my training was erratic and I started each new year from scratch. I knew it would be a challenge to train for a whole year and to increase my training to marathon standard, so I made a year long training plan and set myself achievable goals throughout, like running the Mothers Day Classic, City2Surf, and the Sydney, Gold Coast and Blackmores half marathons.  Having these goals and celebrating each success (I achieved PBs for each distance) helped to keep me motivated.

My biggest motivation, however, came from my fundraising.

I held several events over the year including a comedy night, fundraising walk and sausage sizzle, I even did a ‘dry February’… My fundraising target was $7,500 which seemed immense at the start of the year, yet to date I’ve raised over $9,200 for the Heart Foundation and the donations have kept coming in, even after the event.
I have been blown away by the support I have received and that support has motivated me like nothing else could!

It’s difficult to describe the absolute joy I felt each time a donation came through, coupled with a message of support for the charity and for the task I had taken on.  I read over each of those messages on the morning of the marathon – and reflected on them during the most challenging parts of my run. I have never felt more supported or believed in as I did the day of the marathon and that is something I will carry with me forever.

Running and work
When I started out I was concerned about how I would balance training with the demands of work and my personal life. Surprisingly, it fit into my life extremely well. I frequently run with friends so training provided valuable catch-up time. When I run alone, I reflect on the day, de-stress and put work matters and personal issues into perspective. The process of running provides balance and calm in an otherwise hectic environment.

Running also became something that I could own. It was and is my personal time – time that belongs to just me.  When I run I’m not contactable by email or by phone. My mind is able to relax and I know that no matter what else the day brings, I have had that time to do something I love and something which will help me achieve a personal goal.

It goes without saying that there were times when the demands of work and life meant that I couldn’t train. I learnt to accept that this would happen occasionally and to move my focus onto my next run and ensuring that I would get out to do it – even if it meant starting a 30km run at 5am before work (proving to myself that it is achievable after all).

Final reflections
Running the New York Marathon was, without a doubt, one of the most amazing experiences of my life.  Crowds of people lined the streets the entire way, shouting words of support and giving me high fives as I ran past.

It lifted me and distracted me from the mammoth effort of running.  The marathon starts on Staten Island and before the start gun fires, they belt out Frank Sinatra's New York New York.

I started the run feeling inspired and ready to take on the challenge ahead.

It goes without saying that it was hard work, that there were moments where I just felt exhausted.  But I battled on, helped by the other runners, the spectators and the many people back home who believed in me, had supported me and who did not doubt that I would finish.

I absolutely loved being a part of the New York Marathon.

The experience for me was made all the better because I ran for charity.  A year ago I could not have imagined I would be able to raise over $9,200 for the Heart Foundation; money that will aid their vital research, education and support projects.

Heart disease affects two out of three Australian families and claims an Australian life every 11 minutes.  It is also the number one killer of Australian women.  I was shocked to learn that 4 times as many women die of heart disease than breast cancer and that 90 per cent of Australian women have at least one risk factor, such as high cholesterol, high blood pressure or family history.

The Heart Foundation is working hard to change these statistics.

The Foundation aims to reduce cardiovascular-related health problems and disability by funding world-class research, informing and educating the public and helping people who have heart disease by promoting treatment and rehabilitation. I am extremely proud to have been able to support their work.

If you would like to donate to the Heart Foundation, you can do so by visiting my fundraising page http://2013newyorkmarathon.gofundraise.com.au/page/HNashSmith