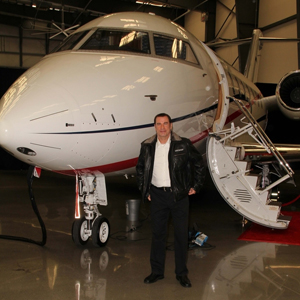 Folklaw was fascinated to learn that an attorney who worked for actor and ‘70s disco icon John Travolta before then acting for the neighbours Travolta was suing, has been suspended from practising law.

Folklaw was fascinated to learn that an attorney who worked for actor and ‘70s disco icon John Travolta before then acting for the neighbours Travolta was suing, has been suspended from practising law.

Folklaw readers of a certain age will remember Travolta’s remarkable, decade-defining movies ‘Grease’ and ‘Saturday Night Fever’, with some trying to forget the flares and fashions.

Travolta, a licensed pilot (see picture) owns several planes. He wanted to work out how he and his neighbours could amicably share an airfield by his home at Jumbolair Aviation Estates in Florida. He’d moved to the community – billed as “America’s Premier Aviation Community” where homes sit next to hangars – on the understanding he’d have access to a runway.

Travolta’s attorney asked Frank Ray Keasler Jr., a Jacksonville property attorney, to fix the problem. Very soon, Frank became part of the problem. And before long, Frank was almost all of the problem, as the Florida Times-Union reported.

Travolta had made it clear he did not want to get involved in a lawsuit when hiring Keasler, with his neighbours, the Garemores, being described as “very litigious people”.

Keasler came up with three potential solutions for Travolta and was paid almost $US10,000.

A little while later, in June 2007, Hawker Trust, Travolta’s titled property owner, decided to sue Jumbolair and the Garemores.

Keasler got in contact with the Garemores and told them their attorney was “not well-equipped for the complexity” of the lawsuit.

Keasler added for good measure that the $4million settlement where they’d sell their property to Travolta was “a worthless piece of paper.”

He said they should fire their attorney and hire him. After all, he said, he “knew more about dirt than dirt”. The Garemores duly hired him, obviously impressed by his perplexing turn of phrase.

When they asked if this was a conflict of interest, Keasler said it wasn’t.

Travolta’s attorney started the ball rolling by asking Keasler to remove himself.

“As one would expect,” the document in question stated, “Mr Travolta was quite upset that the person he thought was his attorney had appeared and undone a settlement that all the participants had long sought.”

Keasler refused to remove himself from the case, writing, “…The Garemores will, likewise, add additional claims to their lawsuit if Mr Travolta, because of his egomagiatic [sic] demeanor, believes that he should have, once again, ‘his way,’ notwithstanding the law dictates contrarily.”

Folklaw admires Frank’s chutzpah in describing Travolta as “egomagiatic” after convincing the Garemores that he was the best lawyer around.

Even after Travolta’s attorney filed a motion against him, Keasler told the Garemores he knew what he was doing.

Judge Sandra Edwards-Stephens disagreed with Keasler’s assertion as to his competence on this particular matter, and she disqualified Keasler from the case, a decision an appeals court upheld.

Keasler even billed the Garemores for his time spent defending himself against disqualification.
Somehow, Folklaw is not surprised.

Keasler was disqualified on 19 June 2008, though he didn’t tell the Garemores.

On 20 June he gave them settlement papers to sign, though he told them they needed to backdate them to 19 June.

Frank’s dealings eventually caught up with him. This month, the Florida Supreme Court rubbed him out of the legal game for three years, starting on 7 February.

Folklaw reckons that Keasler could do worse than to spend his enforced gardening leave practising that inspiring worldwide paean to clients made famous in ‘Grease’ by Australia’s own Olivia Newton-John – “Hopelessly devoted to you”.