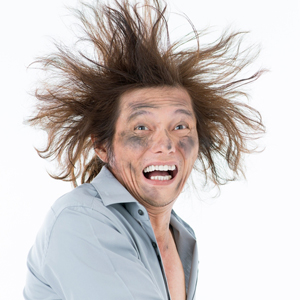 A gung-ho lawyer took ‘aggressive cross-examination’ to a shocking if logical conclusion when he zapped an expert witness on the stand with a trick pen capable of delivering a potentially deadly 750-volt jolt.

LA-based, Harvard-trained lawyer Don Howarth was cross-examining expert witness Dr Meliopoulos in a case in Utah dealing with the shocking of cattle and the good doctor was claiming that the AAA battery could not injure Howarth’s client as much as Howarth claimed.

Dr Meliopoulos explained that a person wouldn’t even feel it if they “completed the circuit” on a 1.5-volt AAA battery. Suddenly, in the best traditions of LA Law, the air became – dare Folklaw say it … oh, why not – electric!

“Sir, you just told the jury that if you completed the circuit with this AAA battery, you wouldn’t even feel it, right?” Howarth intoned, as only an American attorney can.

“Sir, in this pen, I put a AAA battery,” he continued. “The circuit will be completed when you press the back of the pen. Would you like to see whether you can feel the AAA battery, sir?”

“Go ahead and push the back of the pen and tell the jury whether you feel it or not.”

Dr Meliopoulos complied with the request, which he probably shouldn’t have, because although electric shock pens such as these may run on 1.5 volt AAA batteries, they also contain a transformer to convert the DC power of the battery to AC current – delivering up to 750 volts. That’s more than enough to kill someone with certain health conditions. The pen explicitly warns that it should not be used on people over 60 – and Dr Meliopoulos is over 60.

Utah Judge James Brady limited the Californian attorney’s ‘pro hac vice’ privileges so that Howarth could not cross-examine expert witnesses at the next trial, and compelled Howarth to pay $3000 in damages divided between the defendant and the witness as “an appropriate sanction” for witness battery.

The ABA Journal reported that although Howarth’s contingent characterised the trick pen shock as “aggressive cross-examination”, Judge Brady brought up the issue of witness battery (well-chosen word, Judge Brady!), and pointed out the court's power to sanction a lawyer for “harmful or offensive contact” with a witness.

“A witness is entitled to be safe and protected from assaults or physical intimidation,” he wrote. “Had Mr Howarth disclosed his intent to deliver a shock to Dr Meliopoulos, the court would not have allowed it.”