Rocking out in Redfern 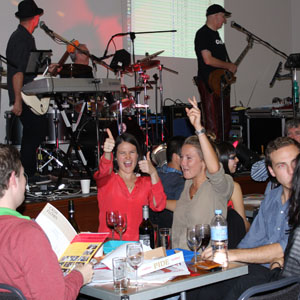 The invitation encouraged contestants to “get competitive” and “get mean” and “claim the title of ‘Most Rockin’ Law Dudes Ever’.”

I was recruited to help out as a scorekeeper on the night.  I agreed… for the feel-good factor; for something to write about; and for a couple of cold slices of pide.  All in all, the deal was not that much different from when I worked as a lawyer at the Centre about a decade ago.

I readied myself at the scorekeeper’s table while the teams took their places.  As promised in the invitation, it was “firm vs. firm, chambers vs. chambers, lawyers vs. students” and everyone vs the bar.

The MC hushed the crowd, and thanked the sponsors - especially the Woolpack Hotel for donating the booze.

She introduced the band, ‘Old Play’ (aka ‘The Ex-Pistols’, ‘Silverhair’ and ‘Age Against the Machine’).  They grooved us into Round one, and the MC moved into the questions.

After the round, the Sydney Law School and the Women’s Legal Service had an early equal lead and, alas, Legal Aid was in last place.

Perhaps you do get what you pay for sometimes.

Next up was a round dedicated to guessing riffs.  The Australian Council of Social Services and the Australian Government Solicitor both scored full marks with this one, proving the old adage that to be a good lawyer it helps if you are a good listener.

Holman Webb was jostling up the rankings.  The Women’s Legal Service remained just ahead.

“We’ve had a noise complaint,” said the MC. “From the neighbours.”

Everybody cheered!  The band played on.  Centre staff scurried around slamming shut windows.

Half-time.  I mentioned to somebody that no-one had thought to bribe the scorekeepers with a drink.  This was soon remedied - by the Women’s Legal Service - and fortified, I returned to my work.

In the second half, a group calling themselves the Public Servants threw a round.  They had ten out of ten answers correct, but then crossed out every answer to replace each with ‘Hall and Oates’.

“The silent auction is nearly over,” said the MC.  “We have something for everyone: pole dancing lessons… two nights of dog minding… drumsticks signed by the drummer from Icehouse...”

For whom the [Justice] Bell tolls

The quiz came to a close, and I sat checking totals while an innovation in fundraising unfolded: people could now pay to sing with the band.

Roger West - one of the Centre’s original staff - came up to the stage and announced that if everybody donated $20, then Justice Virginia Bell would sing.  A collection box went around.  Dollars were chucked in - about a thousand I’m told - and Justice Bell took to the stage.

“I would like to know how much money is in that box,” she said.  “Because it’s not clear to me that everybody here has put in twenty dollars… And I’m not going to associate myself with a scam.”

“As it happens, Roger West - one of the old champions of the Centre - has said that he will double the take if I don’t sing.  And so, that’s what I’m going to do.”

In the end, first place went to Holman Webb.  The Aboriginal Legal Service came second, and third place was a draw between the RLC of the Seventies and the Women’s Legal Service.  For its part, the Redfern Legal Centre raised about $14,000 - in no small part due to the good humour of Justice Bell.

Anthony Jucha is a lawyer and a writer

Rocking out in Redfern