In Conversation with Karyl Nairn QC 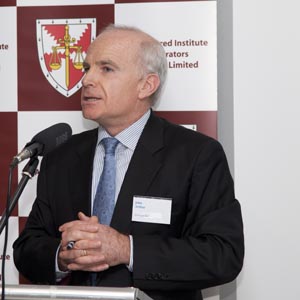 Karyl Nairn QC is one of Australia’s leading lawyers overseas. She is the London based global co-head of Skadden Arps International Litigation and Arbitration Group. John Arthur reports on what she said at an address in Melbourne last month.

Karyl Nairn QC is one of Australia’s leading lawyers overseas. She is the London based global co-head of Skadden Arps International Litigation and Arbitration Group. John Arthur reports on what she said at an address in Melbourne last month.

In conjunction with the Victorian Bar and COMMBAR, the Chartered Institute of Arbitrators Australia hosted a fireside chat with  the prominent international arbitration practitioner Karyl Nairn QC on 30 July.

I was the master of ceremonies, and the chat also included a panel discussion with Albert Monichino QC, the president of the Chartered Institute of Arbitrators (CIArb) Australia and Caroline Kenny QC, CIArb Australia’s chair of Education.

A Fellow of the Chartered Institute of Arbitrators and global co-head of Skadden Arps International Litigation and Arbitration Group, Karyl Nairn QC is a highly respected advocate in international arbitration and one of only three female solicitors to be appointed QC in the UK.

In 1999 she was appointed to represent Australia on the ICC International Court of Arbitration and is now a Vice President of the Court. She was named one of the 50 most influential women in the law by Business magazine in 2007 and is ranked among the top 20 business lawyers in the UK Chambers 100 in 2013. The Times of London has nominated her  as ‘Lawyer of the Week’,  highlighting her stellar defence of Chelsea Football Club owner Roman Abramovich regarding the multibillion-dollar proceedings brought against him in the English High Court by Boris Berezovsky (the largest private litigation in the world).

Nairn spoke of her first case in WA in the 1980s where her successful client announced to her after the hearing that “It is just like an episode of LA Law, but without the sex”.

Nairn also spoke about the differences between litigation and arbitration and the cross-cultural pressures faced by international arbitration practitioners, including the need to modify advocacy styles, given the lack of favour in which cross-examination is held by arbitrators coming from civil law countries.

She highlighted the success of Australian practitioners in international commercial arbitration and encouraged local practitioners to look to Asia for work in the field by building links with practitioners and institutions in that region.

The following are excerpts of questions asked of Nairn by the panel;

Albert Monichino QC (AM): Can you provide a perspective on the quality of Australian arbitrators and arbitration practitioners and opportunities for Australian lawyers in Asia?

Karyl Nairn QC (KN): Asia provides a marvellous opportunity for (Australian lawyers) to get out there and show your stuff. In most disputes, the contracts are drafted in English.

Contract law is basically the same wherever you go. I do cases under the civil code jurisdictions as well as the common law and it’s very rarely that cases are won or lost on some intricacy of the law; it’s the evidence.

If you’re really good at contract and tort law in your home jurisdiction and you’re a clever person and a fair person you will be a good arbitrator.

Get on their panels, know your committee; know who the other international arbitrators being appointed are; they want to see you have authority. Be open-minded and international; be independent; doing one or two cases really well gets you known.

The Australians who are out there are doing really well; they can be chosen by parties even if the dispute has no link to Australia

KN: Not in my experience, although there are tensions in the field. For example, the same people acting as arbitrator and as counsel. The same issues arise again and again.

Karyl Nairn QC is on the left, with Albert Monichino QC and Caroline Kenny QC

CK: What are the differences between running an international arbitration and running a piece of litigation?

KN: In some ways they are very different - obviously the procedures are going to be different. You are going to have far less time at the hearing. Some of the processes will be truncated compared with what you have in litigation and your opponents are usually going to be from different jurisdictions, so you’re not starting from the same familiar baseline.

Whereas if you’re litigating it’s an even playing field, you’re playing cricket in the same way. In (international) arbitration you’re approaching it differently because you have a whole international context to worry about.

Instead of having a single judge whom is bound by precedent,you’re dealing with three different people from different jurisdictions and you are going to have to have arguments that each of them will like and they will have their own baggage which comes from being from a different jurisdiction. You will approach the dispute differently in that way. What isn’t different is your assessment of the merits of the case is the same because you’re deciding the case according to law even if there is a choice of law argument.

You may have to get to the facts in a slightly different way that you do in litigation.

The biggest challenge for those going from litigation to arbitration is that you get far less time.

CK: Take the Abramovich case in the English High Court. How would this have been different if it had been arbitrated?

You have no time to do credit cross in arbitration or you get say three questions and you have to get those absolutely right.

A witness can come across much better in an arbitration (than in litigation) due to the relative informality. There are also huge differences in admissibility of evidence in arbitration compared with litigation

John Arthur (pictued top right) is a CIArb Fellow, member of the Victorian Bar and Asialink's Chairman's Club and the Chancellor's Circle.

In Conversation with Karyl Nairn QC