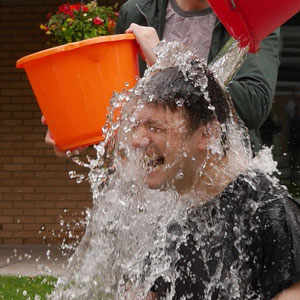 It started off as a warm, fuzzy worldwide trend of pouring ice water over someone or on ourselves, to raise money for the ALS Association.

Even our very own NSW Attorney-General Brad Hazzard took up the challenge on a cold Sydney day, and challenged former premier Barry O’Farrell to do the same.

But it seems the ALS Association has poured cold water over the ice bucket challenge, and has shown it may have slight issues with sharing.

They filed two trademark applications claiming they own the phrases for charitable giving, the Washington Post reports.

But when the move was met with an avalanche of backlash and ice-cold reception from the public, the association went cold on its own bid and decided to revoke its application.

The application has got one trademark attorney particularly fired up, who called it “shameful” when he found the applications last week.

“The reasons in general one seeks to protect a trademark is to prevent others from using it,” trademark attorney Eric Pelton told the Post.

“I find this to be shameful because I hope that they would never consider…preventing some other charity from using the phrase.

If the applications got the go-ahead, the charity could have used the registration to attempt to take other groups to court that use it without a permit, they can pounce on social media accounts using the phrases and they can “potentially stop other charities from using it”.

Pelton wrote in a blog post that he is unsure if the charity “can claim real ownership” of the phrases, and said many others have done the challenge for charities.

In a statement the ALS Association said it had “secured the blessing of the families who initiated the challenge”, before lodging the trademark applications.

“We are intent on preventing for-profit companies from capitalising on this amazing, almost wholly grass-roots, and charitable campaign to raise money and awareness for the fight against ALS.”

The charity has collected more than $100 million in donations in the past month, and the charity says it’s mainly because of thousands of people pouring ice water on themselves.

The slogan went viral on Twitter, and was a rally cry at public events and on T-Shirts.

T-Shirt company Born Into It, and one Kerim Senkal of Massachusetts registered with the U.S. Patent and Trademark Office, seeking the right to use the slogan on clothes and accessories.

Lawyers Weekly got an interesting e-mail from the Sydney office of US legal firm, Jones Day, about how a couple of its partners and some staff took part in the ice bucket challenge.

Folklaw loves it when lawyers do fun stuff, particularly for others.

When Folklaw went about its business of trying to chat to them about their chilling experience, the response was the US office no longer wanted to do the story.

Hmmm, who ever said the local outposts of global firms are run from foreign HQs?

Why the cold feet Jones Day?