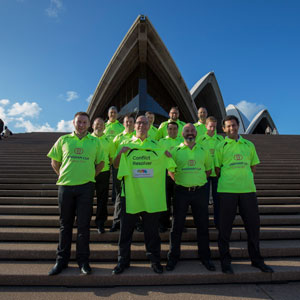 The referees overseeing the Bingham Cup last week were re-named “Conflict Resolvers”, in a legal twist that had Folklaw prick up its ears.

Chad Burnell assistant director – legal at the Australian Sports Commission was a referee at the Bingham Cup. He told Folklaw that the spin on the referee title came from the t-shirt sponsor, mediation firm Negocio Resolutions.

“When [the referees] saw it we all had a chuckle but that name actually stuck throughout the tournament. It got a laugh from the players as well,” he said.

“I guess it was a light-hearted touch to poke fun at us in terms of what we actually do because, at the end of the day, rugby is a game of conflict and we try to resolve it the best we can.”

The Bingham Cup is an international LGBIT tournament that runs every two years. This year around 1,000 players from 15 countries came to Sydney to participate.

Last Sunday (31 August) the Sydney Convicts beat the Brisbane Hustlers 31-0 at the grand final, which attracted over 6,000 spectators despite the appalling weather.

John Berry, the first openly gay US Ambassador to Australia; local Liberal MP Malcolm Turnbull; and NSW Governor Marie Bashir made an appearance at the games, bringing both their support and their inevitable press entourages.

Settling disputes on and off the field

Folklaw thought referees just told players off for breaking the rules but apparently there is more to it than that.

Burnell said that dispute resolution, which is part of his role at the Australian Sports Commission, is quite similar to refereeing rugby.

He said umpiring was about understanding the viewpoint of the two respective captains and getting to a middle ground on how you want to referee the game and how they want to play the game.

“That ties across into dispute resolution where you… have to understand the motivations and interests of the parties [before] you can really start to build a relationship and resolve the issue.

“Sometimes you need to be stern [and sometimes]… you need to have some empathy and understanding [and]… be a little more flexible in how you apply the rules.” 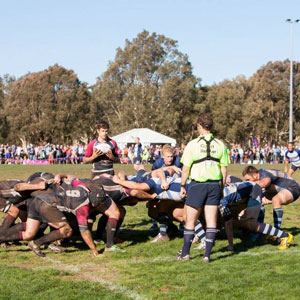 The Bingham Cup was named after Mark Bingham, a gay rights activist who died leading the passenger rebellion on United Flight 93 during the September 11 attacks.

The competition celebrates inclusion in sport and aims to raise awareness of homophobia, which, according to a recent survey, affects 85 per cent of LGBTI sportspeople and spectators.

Burnell said the LGBIT cause was close to his heart. “Knowing quite early on that I was gay there was always that apprehension about how the team would take it if they found out,” he said.

Burnell said he had never personally experienced discrimination, but he supported any policies that would help eliminate homophobia in sport.

He was pleased that the Australian Rugby Union decided to use the momentum of the Bingham Cup to announce their new Inclusion Policy, aimed at stamping out homophobic sentiment.

Folklaw thinks the policy is probably long-overdue but at least events like the Bingham Cup are doing something to raise awareness about the desperately needed cultural changes.

Lets hope the success of the Convicts at the Bingham Cup flows through to the Wobblies, who were smashed to smithereens by the All Blacks, yet again, in their last outing…