Arbitration back in the spotlight 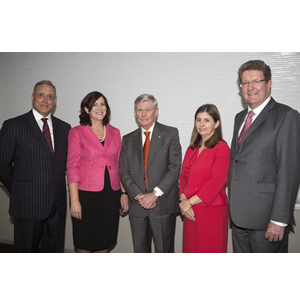 Celebrating the 50th anniversary of our presence in Australia, Baker & McKenzie was honoured to host this prestigious event. Attracting distinguished guests and practitioners from across Australia and beyond –including the Chief Justice of the Federal Court of Australia, the Hon James Allsop; former government solicitor of Australia, Dr Gavan Griffith AO QC; and judge of the Tokyo District Court, the Hon Shota Watanuki – it was the perfect platform to relaunch the NSW Chapter, whose members represent 35 per cent of the entire CIArb Australia membership, and to announce new initiatives including  the  CIArb Australia Essay Competition, which was won this year by Ms Reyna Ge from the University of NSW.

Also in attendance were students of the CIArb Australia Award Writing Course.

As CIArb Australia president Albert Monichino QC remarked in his launch address, “It is not by design we are here on Halloween and the eve of All Saints’ Day. As it happens, tonight’s proceedings coincide with the second Award Writing Course tutorial. In Catholic theology, All Saints Day commemorates all those who have attained the beatific vision in Heaven. In the Chartered Institute lexicon, this is equivalent to passing the Award Writing Exam!”

He went on to note the importance of award writing by quoting a former deputy secretary-general of the International Court of Arbitration of the International Chamber of Commerce, Jennifer Kirby: “Awards are incredibly powerful documents. Because awards are part of our stock-in-trade, we can sometimes lose sight of this. But the power an arbitrator wields when rendering an award is exceptional. We are all familiar with the classical image of Justice, with the scales in her left hand and a sword in her right.

Well, in international arbitration that sword is more like an M16. In making their award, an arbitrator is generally issuing a decision that (1) cannot be reviewed on the merits, and (2) is enforceable around the world.

No state judge anywhere has anything like that kind of power. And arbitrators wield this power with very little accountability: (a) it is often not clear what (if any) ethical rules apply to them; (b) they are usually either partially or wholly immune from suit; their decisions in commercial arbitration are rarely publically available; and (c) there’s no guide to tell you which international arbitrators are good, which are bad and which are just plain ugly.”

In introducing the Hon Murray Gleeson AC, NSW state convenor and barrister Julie Soars described the different careers and employers of the former chief justice placing him as a member of Generation Y rather than a baby boomer (despite his age and experience).

For example, he has been a tutor in law at St Pauls College, a solicitor, barrister (appointed a QC in 1974), a part-time university lecturer, on the council of and a former president of the Bar Association, former chief justice of NSW, a lieutenant governor of NSW and former chief justice of the High Court of Australia (a role he held for 10 years from 1998 to 2008). He is a non-permanent judge of the Hong Kong Court of Final Appeal, patron of CIArb Australia and is regularly appointed arbitrator in both domestic and international matters.

Mr Gleeson’s address, ‘Award Writing in International Commercial Arbitration’, provided an enlightening insight expounding upon the formal and structural requirements of an award, as well as addressing the substantive requirements, including the reasons that must be set out in an award. He emphasised the need to address the law that governs the issues in dispute as well as pitching the award at the right level – i.e. the award should deal with the facts, legal propositions and the reasons for its decisions at the appropriate level for the particular case.

Mr Gleeson considered the manner in which evidence and findings of fact are to be dealt with in an award, given the different approach to evidence in international arbitrations as compared with litigation in the courts, particularly common law jurisdictions such as Australia, and the manner in which legal arguments and authorities and expert evidence should be considered in an award.

Interestingly, he noted that arbitrators are entitled to be reasonably demanding in the level of assistance they seek from the parties and their lawyers. For example, the tribunal may invite the parties to comment on a draft list of issues prepared by the tribunal.

Finally, Mr Gleeson addressed the relief that may be granted to the parties, including the jurisdiction of the tribunal to grant certain relief such as interim measures, damages or specific performance, as well as the granting of interest and costs, noting that it has discretion to award costs in favour of the successful party on the basis that the legal costs and expenses are reasonable.

In his concluding address,  CIArb Australia trustee Malcolm Holmes QC remarked on the brilliance of Mr Gleeson’s insights and announced that the Diploma Course on International Commercial Arbitration, which carries a prestigious global accreditation, will be held in  Sydney between 18 and 26 April 2015 to mark the centenary of the Chartered Institute of Arbitrators.

In a Halloween-esque frame, the evening was a treat for all who were in attendance.

Jo Delaney is special counsel at Baker & McKenzie, Sydney and is a councillor of CIArb Australia.

Arbitration back in the spotlight