An illuminating night with the Hon Ian Callinan 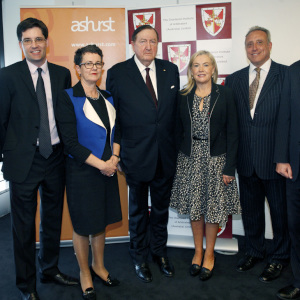 Thunderstorms and lightning lent a festive cheer to the CIArb Queensland Chapter Christmas function on 9 December 2014, addressed by special guest the Hon Ian Callinan AC. The event attracted more than 130 registrants, including distinguished guests the Hon Justice John Byrne AO RFD and the Hon Justice James Douglas of the Supreme Court of Queensland, Queensland Solicitor-General Peter Dunning QC, along with leading barristers, solicitors and in-house counsel. The audience was treated to a wide-ranging discussion on the intersection of courts and arbitral bodies.

Arbitration on the rise

Mr Callinan began his address by outlining that commercial arbitrations are happening every day in Australia and becoming increasingly common, resolving disputes in a range of sectors beyond the traditional construction and engineering.

Citing several high-profile cases, he provided a timely example of the intersection of courts and arbitral bodies by reference to the inter-state Australia and East Timor arbitration being conducted in The Hague, which concerns the validity of the treaty between the two countries over the oil and gas reserves in the Timor Sea. Mr Callinan sat as one of the 17 judges of the International Court of Justice, which entertained an injunction application in relation to this arbitration.

Also mentioned was the investor-state arbitration between Philip Morris and the Australian Government concerning whether the enactment of Australia’s plain-packaging legislation infringes Australia’s obligations under the Australia-Hong Kong Bilateral Investment Treaty.

Convergence of common and civil law

Mr Callinan urged common law lawyers to become more familiar with civil law concepts, explaining that arbitration historically grew from civil law and that international arbitration today involves a mix of common law and civil law procedures. He addressed the traditional differences between the systems, including their approaches to the role of precedent and the distinction between fact and law. In his view, convergence between the two systems will continue.

The challenge set by Mr Callinan

Touching on some of the steps taken in support of arbitration over recent years in Australia and abroad, Mr Callinan said the number of countries that have acceded to the New York Convention has increased to more than 150, while the number of arbitration centres established (including in the Asia-Pacific region) has grown rapidly. Arbitration legislation in Australia (covering both domestic and international) has been harmonised through the adoption of the UNCITRAL Model Law, which makes awards virtually appeal-proof.

Despite these very positive steps, Mr Callinan challenged attendees to keep the core objectives of arbitration in mind in their practice – namely, speed, efficiency, cost-effectiveness and privacy - all major reasons why parties choose to resolve disputes by arbitration rather than the courts.

Following Mr Callinan’s address, guests were treated to an engaging panel discussion facilitated by Joanna Jenkins, Brisbane-based Ashurst partner. Mr Callinan was joined by Albert Monichino QC (President of CIArb Australia), Caroline Kenny QC (Chair of CIArb Australia’s Education Committee) and Stephen Lee (Convenor of CIArb Australia Qld Chapter). The lively debate covered questions such as whether judges make good arbitrators (which Mr Callinan let go through to the keeper), whether the Federal Court of Australia should have exclusive jurisdiction in respect of international arbitration matters, and whether the system of party-appointed arbitrators should be discarded in favour of either single or multi-party tribunals appointed solely by arbitral institutions.

Mr Callinan’s address, and the lively Q&A session that followed, confirmed the real interest in arbitration in Queensland (and more broadly, Australia). While the level of arbitration activity in Queensland is something rarely discussed, it is fair to say that the state is home to significant cases – no doubt because it has some of the largest infrastructure projects.

Invariably, parties who agree to arbitration do so because they want their disputes resolved in a way that is different to the court. Leaving aside enforceability of awards (which is of paramount relevance in international disputes), speed, efficiency, privacy and finality are the key reasons why parties choose arbitration. The overriding message from this event is that it is incumbent on arbitration practitioners, and arbitrators, to look at ways of conducting arbitrations to ensure that these underlying objectives are met. Only then will arbitration remain genuine and attractive in comparison to conventional litigation.

The Queensland Chapter looks forward to 2015, as CIArb enters its Centenary Year.

An illuminating night with the Hon Ian Callinan