Why am I working harder but it feels like I’m standing still? 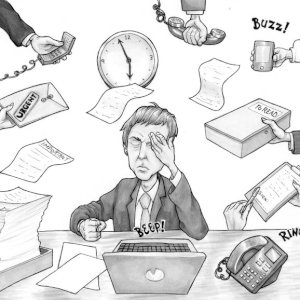 Have you ever been in the situation when you’ve had so much to do that you haven’t even known where to start? As a result, you don’t focus on anything and go into a freeze that only compounds the problem.

Having too much to do is the reality of our lives now. We thought that the internet and connectivity would make our work more efficient, but instead it created overwhelming opportunity to engage with and absorb information. The problem we now face is: How do I discern which pieces of information are useful to me?

I looked up as my assistant walked into my office with a list of actions that I knew had to be completed by the end of the day. A feeling of dread came over me – not because I didn’t know what to do or how to go about it, but because there simply wasn’t enough time. I started thinking that there must be a better way. It felt like I was continually in the forest and little fires were breaking out all around me. I had to attend to the fires to stop them getting out of hand, but as soon as I focused on one, another grew bigger...

If all information is content, how much time do we spend asking ourselves what the context of that information is? Without context, the information is just one big garbage tip. How many times have you asked yourself the context of the task you’re engaged in right now – and why it’s relevant? Are you just doing it because it’s what you’ve done before? Or is it relevant because you have a clear context of how it can be useful to you and lead you in the direction you want to go?

As an example of the value of context, a group of friends could sit down and engage in a long discussion about what is the best fruit. Someone clever will always say ‘tomato’: it’s nutritious, versatile, sweet or sour...

But what about the mango? That’s much juicier and tastier. Or the banana, which is highly portable and convenient and can be eaten anywhere. The discussion could go on forever. But if we call fruit the content of the discussion, and then decide that energy is the context, then the obvious answer is the banana. What simply happens is that context gives meaning to content.

I leant back in my chair and asked why I was doing all these things. I took the list of to-dos and quickly worked through it, assigning each item a context. That didn’t work; some things still didn’t fit properly. So I broke the list into groups. There were items that concerned the internal workings of the firm; items that were relevant to clients; the rest were a range of matters to do with staff.

I took the group of items concerned with the firm and chose a context of growth – we’d had a long discussion about growth at the last partners’ meeting. When I applied that context it immediately became obvious which items were relevant: just two out of the four. That showed me what to focus on. It felt good getting rid of 50 percent of the items in that category, and what remained was achievable.

Application at home and work

Context can not only be applied to lists but to annual plans, or anything you do in your life. When you decide to go on holiday with your partner, do you start and finish with the destination? Or do you step back and ask the context of the holiday? It could be relaxation versus activity; it could be weather. There may be several different contexts driving your choice, in which case you need to decide the most important one. Using context helps you to stay on track.

I was recently with a client who was moving their business into a high-growth phase. They wanted to appoint a new finance director. Half the board wanted a safe pair of hands; the others wanted someone who had been involved with growth companies before. The debate over whom to appoint raged back and forth, and at times became highly personal since each board member had their preferred candidate. After some time, at the point of exhaustion when they were prepared to listen, I asked them the context for the role and for the point in the company’s life cycle. They replied that it was growth. The choice became obvious, and alignment resulted.

I realised that a lot of the time I wasn’t actually sure what my context was when I was at work. On the one hand, I was there to earn revenue by solving clients’ problems. I was also there to build a business with my partners. Sometimes I wished I could do just one thing, but professional life is not that simple. So I asked myself, ‘what’s the one contextual word for my client role?’ I wrote down the word ‘relationship’. If that was my context, what pieces of content could I focus on? I took my to-do list again, and immediately a couple of client items jumped out at me. If I just kept driving relationship as context, everything I needed to do would become obvious, instead of my wasting time deciding what to prioritise.

An uncanny feeling of calm descended on me.

Why am I working harder but it feels like I’m standing still?