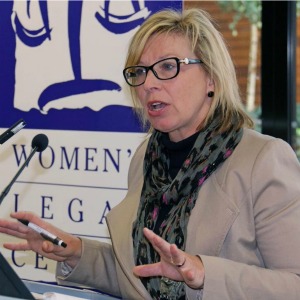 The 2015 Australian of the Year and fierce domestic violence advocate Rosie Batty (pictured) questioned the commitment of government to the eradication of domestic violence when speaking at the Women and Justice Forum: Women on the Front Line as part of the ACT Law Society's Law Week in Canberra last month (12 May).

Ms Batty spoke of the stress and anxiety of having to deal with domestic violence proceedings and the Family Court process without legal support because she did not have the funds to pay for lawyers, she did not qualify for legal aid and she was unable to access other legal support services.

She did not have the luxury of having a legal advocate to stand up for her to provide a voice for herself and her son, Luke, and instead had to stand alone to fight to make people understand that “a threat to kill was big s**t”.

She, understandably, “lost faith in the justice system” and warns that without proper government funding and community support, it will only get worse.

Ms Batty says: “The journey of domestic violence always escalates, it never goes away, there are red flags along the way.”

She says that without the proper training for all those who work in the system to recognise the red flags, the system fails people – as it did Ms Batty and her son, who was killed by his father in 2014.

Ms Batty called for organisations, such as the Women’s Legal Centre and other frontline specialist services, to be allocated more resources and funding to combat  domestic violence.

She also reflected on the financial cost of legal proceedings when navigating the parenting order or custody process, and questioned what really was in the ‘best interests’ of a child who has been exposed to domestic violence.

The reality is that many women in violent relationships face the unfathomable decision of having to settle parenting orders because they cannot afford to fight to prevent the perpetrator from having access to children exposed to domestic violence – a dilemma no parent should ever face.

The Budget response to the serious issue of domestic violence not only increases pressure on families with cuts to the parental leave scheme, but fails to heed the recommendations of  the Australian Productivity Commission identifying the need to drastically increase legal aid funding, a recommendation that gained almost unprecedented support from the Attorneys-General across Australia.

However, the Budget does not stop there in potentially compromising victims of domestic violence.

The increased filing fees in the Family Court of Australia (and other Federal Courts) directly compromises the safety of women and children in domestically violent relationships who may be financially barred from initiating or continuing parental or custody proceedings due to the  increased fees.

Anne Sheehan, National Representative of Soroptimist International Australia, states “the increase in court filing fees, combined with reduced access to legal aid funding and reduced capacity to obtain assistance from domestic violence community legal centres …  is untenable [for] such vulnerable people [to be in that] position.”

And, we must not forget that since the Budget release, statistically, at least another two women have died from domestic violence and many more have been hospitalised.

At the Women and Justice Forum, Ms Batty also said: “I may seem angry, I may be passionate, but I will take a stand, and it’s within all of us to take a stand”, and called not only for government to step up, but for the corporate sector to also provide much-needed assistance to work to eradicate domestic violence.

How many more women and children need to die or be hospitalised before this issue is taken seriously by our government and community?

Even one is too many.

Kylie Hillard is a barrister at Griffith Chambers in Brisbane.