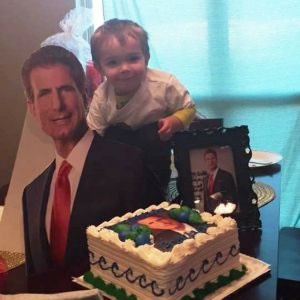 All two-year-old Grayson Dobra wanted for his birthday was to celebrate his favourite law firm advertisement.

But this little kid’s fascination with Louisiana lawyer Morris Bart has taken on a life of its own as his ad-themed birthday party was showered with international media attention last week.

Mr Bart was ecstatic about the free publicity and even released a YouTube video personally thanking the little boy for his enthusiasm.

“So the last 48 hours have been really exciting around here,” Mr Bart said, beaming from ear to ear.

“It turns out an adorable two-year-old decided to have ... a very unique party – a Morris Bart themed birthday party! He is just enthralled with my ads and I couldn’t be more flattered.”

“Before he could walk or talk, every time the Morris Bart commercial would come on, he was just fixated,” L'erin Dobra told The Acadiana Advocate.

“You couldn’t talk to him. You couldn’t do anything with him. He would just sit and stare at the TV. You could call his name, give him a toy. He didn’t care. He just wanted to watch the Bart commercial.”

Parents are often instructed to let their kids pursue their passions, and Grayson’s mum followed this to the letter. She hosted an all-out Morris Bart-themed party with the lawyer’s face plastered to a cardboard cut-out, a t-shirt and a birthday cake.

But, of course, a cuteness overload of such proportions could not be confined to Louisiana.

“The story broke in the local Advocate newspaper and then took off, went worldwide, we’ve been inundated with interviews with The Huffington Post, The Wall Street Journal,” said Mr Bart.

“We couldn’t be more proud of this child, of his mum, of his dad. They are a beautiful family. We would like to wish Grayson a very happy birthday and I hope you have a wonderful year.”

Folklaw applauds this pioneering toddler for his originality, as well as his remarkable capacity to charm the entire planet with his inexplicable love for lawyers.