Lawyers vs Google: Who wins? 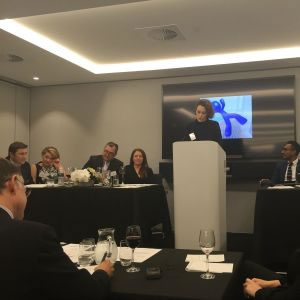 Can you Google everything you need to know about employment law in two hours? That was the question at the centre of this year’s NSW Young Lawyers’ comedy debate.

The State of the Unions Workplace Debate was held last Thursday at DLA Piper’s Sydney office.

During the debate neither the young lawyers, law firms, nor indeed even the adjudicator and patron, Justice Stephen Gageler, escaped unscathed from the searing wit of this year’s participants.

The two teams offered hilarious, irreverent and sometimes questionable banter to what was a side-splitting display of vigorous argument and debate on the topic: ‘Google it: You can learn everything about employment law in two hours’.

This year, the debate attracted more than 100 people from the employment law and industrial relations community and raised more than $1,500 for Beyondblue, the nominated charity of the NSW Young Lawyers 2015.

The format of the debate required that each team be made up of a barrister, solicitor, student and a wild card (being in-house counsel or other members of the community).

Traipsing into territory familiar to most lawyers, the affirmative team (Erin Eckhoff, Michael Nightingale, Sydney Abba, and Jamie Darams) explored our use and increasing reliance on information available on the internet via Google.

Ms Eckhoff characterised Google as “a really attentive and studious personal assistant – one always ready with suggestions for the perfect nearby café, knows the names and birthdays of all your loved ones and can shop for them better than you can. It can tell you everything you need to know – and a lot of stuff you don’t – about anything.”

Mr Nightingale recalled the days when “case reports came in things called books, when if you wanted a copy of the NSW Belts and Braces Award 1904, you trudged off to a hole in the wall in some government building or other and bought a paper copy from a very angry woman with a limp and a glass eye” against the ready access that lawyers, and members of the public now have to legal information via the internet.

Macquarie University student Ms Abba, a novice in the areas of employment law and industrial relations, took the audience through the summary, ’What Google Has Taught Me in Two Hours: The 5 Golden Rules of Employment Law (or a lesson in relationships)’.

Ms Abba, winner of the People’s Choice Award, concluded “employment law, like relationships, is really about balancing the power dynamics. I should know – I tried googling ‘how to break the glass ceiling” and all I got was a bunch of Bunnings ads.”

Mr Darams closed the argument for the affirmative team with the signature wit of junior counsel and some good-natured jibes against the members of the negative team.

The negative team (Nandan Subramaniam, Oshie Fagir, Emily Aitken, and Greg Johnson) spent the evening defending the merits, and complexity of employment law and industrial relations, and pointing out the limitations of Google in solving the tricky legal questions that lawyers have to decipher on a daily basis.

Mr Subramaniam, a student at the UNSW, defended the intricacies of employment law and industrial relations drawing on his experience as a paralegal at Seyfarth Shaw.

“Google is like the Royal Commission, it’s got answers to a lot of things, just nothing relevant,” he said.

Mr Fagir outlined the complexity of employment law, in particular taking the audience through a NSW Industrial Relations Commission case that defied Google answers on heat of the moment resignations.

Ms Aitken, a solicitor at Nick Stevens & Associates, continued the good fight for the negative team, with a hilarious speech and slideshow, which later saw her awarded Best Speaker for the evening’s debate.

She outlined the key issues in relying on Google, and forayed into the Google Conspiracy, before declaring that “the affirmative team is a bit like WorkChoices – dead, buried, cremated”.

Mr Johnson, a barrister and former president of the Young Lawyers, summarised the negative team’s argument with some good-natured sledging while exalting the difficulties of employment law.

“Employment law is hard, even Justice Gageler didn’t practice it when he was at the Bar!” he said.

Justice Gageler, in making his decision, revealed that he was somewhat persuaded by the two hours he spent on Google learning how to adjudicate a debate, with the Workplace Debate being the first debate he has adjudicated in his career.

Justice Gageler awarded the debate to the negative team.

Clare Kerley, Chair of the NSW Young Lawyers, Workplace & Safety Law Committee awarded the People’s Choice Award to Ms Abba, not least for her bravery in repeatedly referring to his Honour as “G-Meister-J”.

Philippa Noakes is a co-vice chair of the Workplace and Safety Law Committee and an associate at Seyfarth Shaw.

Lawyers vs Google: Who wins?