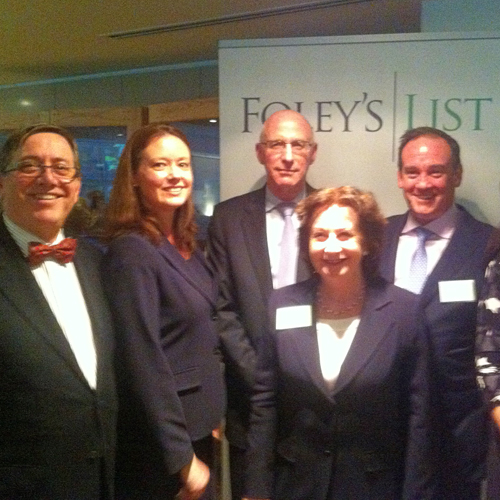 More flexibility in court sitting hours may be needed to ensure female silks have the same opportunities as their male counterparts, barristers have heard.

At a celebration of women in the law hosted by Foley’s List last night (23 October), Michael Wyles SC urged the profession to “be vigilant to guard against unthinking practices which were developed by men but which are no longer appropriate”.

“It requires male silks to not insist on an 8am conference where the junior has in place child-minding facilities between 8am and 6pm,” said Wyles, who was appointed Foley’s List chairman in August this year.

“It requires encouragement of our female colleagues where they confront that difficult period after seven or so years at the Bar such that the joys of mothering appear to be overwhelmingly attractive.”

Around 100 solicitors, barristers, judicial officers and guests of Foley’s List, a barristers’ list led by 37 silks, gathered at the Essoign Club in Melbourne to hear Justice Pamela Tate of the Supreme Court of Victoria give a keynote address.

Justice Tate gained a first class honours degree in law in 1988 before taking silk in 2002. She is a former member of Foley's List.

Tate revealed an experience she had as a young barrister attending a lunch where a then-senior member of the Bar expressed his view that women were not necessarily natural barristers.

“Her Honour, last night, addressed the things that she would have liked to have to said to him … then recounted the fact that … females were particularly suited to being barristers because of, what I would call, their ‘Atticus Finch quality’ of being able to step into another person’s shoes and look at things from their point of view,” said Wyles.

An old tradition associated with the Bar is strict court sitting hours.

“Once upon a time there was a very strict rule that the court didn’t sit for counsel’s convenience and I think that, in this day and age, that’s just no longer appropriate,” said Wyles.

His children are now grown up but Wyles recalls the logistics of child minding and an occasion where he told the judge that he could not continue beyond 4pm because he’d promised to pick the children up.

Typical court hours vary, but generally run from roughly 10.15am to 4.30pm.

Wyles asked why court could not begin at 9am, when many women and men can be “ready to go".

“What would be wrong with starting court at 9am and ensuring that we’re finished by 3pm so that then you had time to pick up your children, organise your evening, do some work in the evening after having some quality time with them?” he asked.

“Finishing at 4.30pm can put a lot of pressure on people at the end of the day … your clients want to see you for half an hour after court ... you might be okay if you know that you can get there by 6pm but I just think that puts a lot of people under pressure.”

Six of the first 10 women to sign the Bar roll were Foley's List members, and today Foley's boasts a higher percentage of women on their list than the Victorian Bar overall, with 29.6 per cent.