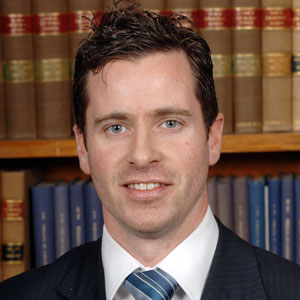 Two tax specialists who are neighbours at Aickin Chambers have nudged Victoria ahead of NSW in securing the most barrister finalists at this year’s Lawyers Weekly Law Awards, proudly sponsored by Michael Page Legal.

Two tax specialists who are neighbours at Aickin Chambers have nudged Victoria ahead of NSW in securing the most barrister finalists at this year’s Lawyers Weekly Law Awards, proudly sponsored by Michael Page Legal.

Eugene Wheelahan (pictured right) regularly works with Simon Steward QC as his junior barrister. Eugene is a finalist for The Junior Barrister Award, proudly sponsored by Sheahan Lock Partners, while Simon is in the running for The Senior Barrister Award; however, neither submitted an entry.

Their mutual client, Jeremy Geale, a partner at KPMG Tax Law, made the nominations.

“It’s a very good thing, I’m very happy,” said Eugene when told that Jeremy had entered the Awards on his behalf.

Jeremy described Simon as “undoubtedly one of the leaders in his field”.  He had equally high praise for Eugene, whom he commended for bringing out the best in senior counsel.

Almost all of the barrister finalists were nominated by clients or peers, whereas the private practice categories attracted numerous self-nominations.

In the Senior Barrister category, Jane Dixon QC from Dever’s List was nominated by barrister’s clerk John Dever; a solicitor in Melbourne has entered on behalf of Carmella Ben-Simon from Owen Dixon Chambers West, and Julia Lonergan SC from 12 Wentworth Selborne Chambers was recommended by a senior figure at the NSW Bar.

Jane is the president of civil liberties body Liberty Victoria and is regularly briefed in homicide trials and ‘death in custody’ cases. She is also chair of the Pro Bono Committee of the Victorian Bar and recently put a call out to barristers to participate in a pro bono scheme for unrepresented litigants.

Fellow Melbournian Carmella has been commended for her contribution to the legal profession, not only for running large and complex legal matters, but also for her ongoing involvement in committees, pro bono work and mentoring of junior solicitors and barristers throughout her 25-year-long career.

Meanwhile, in NSW, Julia has been involved in child sexual assault inquiries in Newcastle and has been recognised for undertaking difficult work with empathy and intelligence.

Maria Gerace from Maurice Byers Chambers, a finalist for The Junior Barrister Award, is also assisting in the Newcastle inquiries as well as the Royal Commission into Institutional Responses to Child Sexual Abuse. She is joined as a finalist by Alexander Flecknoe-Brown from 5 Wentworth in Sydney, who has worked on numerous high-profile commercial and public law disputes.

Eugene Wheelahan, the third finalist this category, said he is not surprised that so many of the barristers did not nominate themselves, despite their noteworthy achievements.

He claimed there is antiquated attitude at the Bar that self-promotion is frowned upon. “It might be a hangover from older times,” he added.

A Baker walks into the Bar

Prior to joining the Bar, Eugene was a solicitor at Baker & McKenzie. Even though he enjoyed working in private practice, he said he has no intention of leaving the Bar.

“I’m fully committed to the Bar; I like working for myself,” he said.

“I like the thrill of running a court case and being in court and seeing all the preparation you’ve been doing come to fruition.”

For the past two years Eugene has focused on tax law and plans to continue doing so. He said the practice area is not as “dry and boring” as many people may think.

“It’s a never-ending quest to get your head around all the changes and provisions out there … [and] most cases turn on something that has nothing to do with tax,” he added.

The Awards will be at Sydney’s Four Seasons Hotel on Friday 8 August.