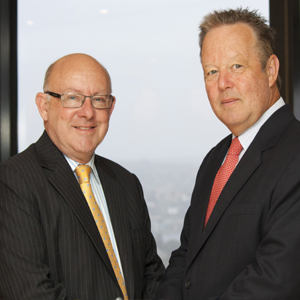 Blake Dawson has poached two leading M&A partners from Gilbert + Tobin following a spate of announced departures from the firm over the last three months.

Garry Besson and Gary Lawler join Blake’s Sydney office as the firm moves forward with its plans to combine its Asian practice with that of Ashurst.

The firm will adopt the Ashurst name in all markets from 1 March 2012.

Both partners have been consistently recognised as leaders in Australia's M&A sector. In 2011, Besson was named Australian Dealmaker of the Year at the 2011 Lawyers Weekly Awards.

“Having worked on the other side of deals from Garry and Gary, I have first hand knowledge of the great counsel they give to their clients, and I very much look forward to them being on our team,” said the national head of Blakes’ M&A team, Marie McDonald.

Besson and Lawler will be joining their former colleague Phil Breden, another leading M&A partner poached from G + T in April last year.

“We’re looking for people who can fill strategic gaps and we look quite broadly in the market for those people,” said Carrington, adding that the appointments were part of a broader strategy to build up the firm’s capability in a number of key areas ahead of the merger.

“We feel that we have a very strong M&A practice in both Sydney and Melbourne. [Besson and Lawler] are extremely highly regarded and [M&A] is an area we’d like to bolster, particularly when the market does turn around because no doubt it’s a little subdued at the moment.”

Lawler commenced on 1 February and Besson on 3 January.

While both are currently on leave and were unable to comment on their move, Carrington said they are “already established in the Blakes office”.

Carrington could not confirm whether the new recruits were bringing additional lawyers, including members of their former team, across with them to Blakes.