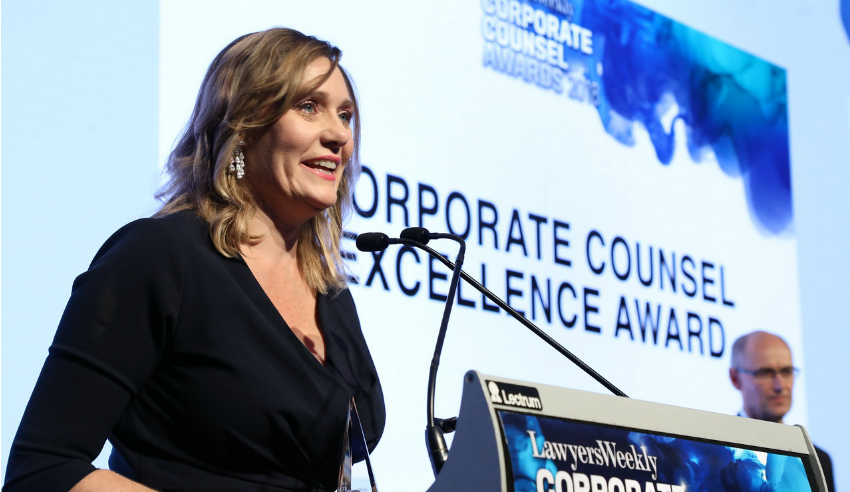 Lawyers Weekly spoke with the winner of the Excellence Award and Banking and Finance Award from the recent Corporate Counsel Awards about her thoughts on in-house culture.

Catherine James, the head of legal (corporate and investments) at Challenger, is proud that her employer is committed to paying equity, paying superannuation to those on parental leave, and providing financial security in retirement.

But, she noted, the industry across the board needs to be doing better.

“Every organisation needs to focus on eliminating the gender pay gap,” she argued.

“True comparative analysis of remuneration for each gender needs to be undertaken by all organisations with a top-down approach, committed to rectifying the gap as a matter of priority, training management in unconscious bias, and ensuring – once rectified – the gap remains closed.”

Pay is not the only challenge facing women in the workplace, she added, with a myriad cultural issues also prevalent.

“Organisations have been structurally designed by men, which creates issues at the outset for women whether or not they have children,” she explained.

“As a generalisation, women communicate differently to men, and I have often thought organisational structure would not look the same if women had been in charge of structural creation.”

Education, leadership skills, mentoring, sponsorship and networking will all be critical ingredients, she said, in successfully addressing the ingrained cultural environment.

It’s also imperative, she added, for prominent persons within the in-house space – both men and women – to stand up and support those coming through the ranks.

“As leaders, we need to pave the way for those who follow in our footsteps to stand on our shoulders and build on the progress we have made,” she said.

As a leader in the corporate counsel space, Ms James acknowledges her own role to play, using her two awards to inspire those around her and those coming through the ranks.

“It is not easy being a working parent (particularly where both parents work) and we may not always get the balance right, but we should never give up; our perseverance will help shape future generations,” she said.

The award wins were also timely, she said, in light of International Women’s Day last week.

“I hope they serve to inspire all women, and emphasise the importance of education and financial independence,” she noted.

“I am a member of the First 100 Years Steering Committee [celebrating this year’s centenary of women being permitted to practise law in NSW] and I am looking forward to commemorating all the incredible female lawyers of the last 100 years, while advocating for a strong and equal future for all women in the legal profession.”