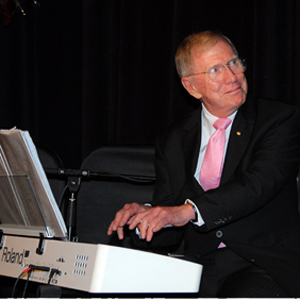 Michael Kirby showed he is a man of many talents when he made an impromptu performance on the keyboard at the 2012 Lawyers Weekly Australian Law Awards, proudly sponsored by List A Barristers.

The former High Court judge elicited howls of laughter from MC James O’Loghlin and the more than 200 guests present at the Sofitel Hotel in Melbourne on Friday night (27 July), banging out a few notes while Trevor Gay, the regional manager of Bentley in Australia, New Zealand and Southeast Asia, introduced the former High Court judge to present the Lifetime Achievement Award named in his honour.

Kirby then took to the microphone to introduce Elizabeth Evatt, the winner of the Bentley, Michael Kirby Lifetime Achievement Award. While Kirby’s appearance behind the keyboard took some beating, he managed to eclipse his earlier performance with a wonderful introduction of Elizabeth Evatt.

“You can always tell people whose real heart is in human rights; when they do things for the stigmatised and those who aren’t popular, and Elizabeth has always been there for that” said Kirby.

Evatt’s impact on Australian society has been immense. Her numerous achievements include presiding over a range of important legal institutions , including as chair of the Royal Commission into Human Relationships, as the founding chief judge of the Family Court of Australia, and spending three years as chair of the United Nations Committee on the Elimination of Discrimination Against Women.

Evatt delivered a short and gracious acceptance speech that offered reflections on a legal career that started almost 70 years ago.

“Women in the law are now in numbers which would have been inconceivable in 1955,” she said. “They’re in all branches of the law and in the judiciary … and to all those who thought that women in the law would not be a success they have to really take back their words”

We can do better
The most emotional part of the evening was when Marie Jepson accepted the inaugural LitSupport Advocate Award.

Marie (pictured accepting the award with Brad Gabriel from LitSupport), the co-founder and a director of the Tristan Jepson Memorial Foundation (TJMF), made a poignant speech that implored the legal profession to work harder to ensure it looks after its own.

“In response to Tristan’s oft-asked question ‘why must it be done this way?’ I look forward to being able to say, it doesn’t, we can do things differently,” she said.

Marie and her husband George co-founded the TJMF in honour of their son, Tristan, a young lawyer who took his own life in 2004 after fighting clinical depression.

Freehills triumphant
In the 10 contested awards, it was the Freehills contingent that emerged with the biggest smiles.

Stefanie Allen got the ball rolling by winning the inaugural Empire Careers Senior Associate Award, with her work advising ANZ being likened to that of a “highly-experienced corporate partner” by Bob Santamaria, ANZ group general counsel.

The lawyers and senior management that help to make law firms successful businesses were honoured next.

Andrew Price from Wotton + Kearney came out on top of a star-studded field in the LexisNexis Practice Manager Award. Price, W+K’s chief operating officer, has presided over a period of extensive revenue and partner growth at the insurance specialists.

The leaders of tomorrow were featured in the College of Law, Law Student Award. The winner, Sean Lau from the University of New South Wales, is, according to one senior fellow at UNSW, “on his way to being one of the highest-achieving graduates UNSW has ever produced”.

The major award for transactional lawyers was the JLegal Dealmaker of the Year Award. This year’s finalists featured six of Australia’s savviest dealmakers, with Rebecca Maslen-Stannage from Freehills taking home the prize. Maslen-Stannage’s role in completing the restructure of Centro, a deal worth more than $16 billion, was cited as the major achievement that earned her the nod ahead of her colleague Tony Damian from Freehills and rivals from King & Wood Mallesons, Baker & McKenzie and Clayton Utz.

An award featured for the first time this year was the ACLA Public Service Award. This award recognises the massive contribution to the legal profession of government lawyers, with Sue Bird, the chief counsel of the Australian Government Department of Human Services, getting the gong. Bird’s department represents around one quarter of Australia’s Federal Government employees.

Young lawyers in their first three years of practice were the next to be put under the spotlight. Ajay Khandhar from Middletons won the Trudie Rogers Medical Lawyers Young Gun Award. His work as a workplace relations and safety lawyer and role as the executive councillor of the NSW Young Lawyers helped him to pip nominees from Fox Tucker Lawyers, Kah Lawyers, Bakers, Squire Sanders and DLA Piper.

One of the highlight’s of the night was the awarding of the Burgess Paluch Pro Bono Award. Pro Bono work is the most distinguishing feature of the legal profession. Luke Geary from Salvos Legal won the award, with the firm he helped to found now presiding over 300 cases on a pro bono every fortnight.

The Allied Recruitment Solutions Talent Manager Award recognises senior management that looks after a firm’s greatest asset - its people. Anne Reeves, the HR general manager at Maurice Blackburn, won this prestigious award. Reeves has been instrumental in increasing engagement and gender diversity at the firm.

The heads of national and global law firms were vying for the Randstad Managing Partner Award.

On the night, Gavin Bell, the CEO and managing partner of Freehills, was awarded this blue-ribbon prize. Bell helped Freehills break through the $500 million dollar revenue mark for the first time in 2010-11 and has put to bed the merger with Herbert Smith, which will make the combined firm one of the largest in the Asia-Pacific.