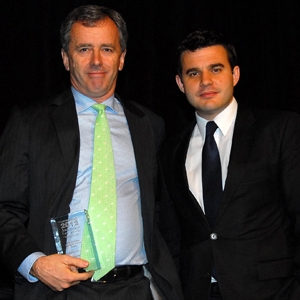 iv> Bell (pictured left), who has held both positions at Freehills since 2005, beat off competition from Corrs Chambers Westgarth CEO John Denton, Baker & McKenzie’s Chris Freeland,  Wotton + Kearney MP David Kearney, Ashurst Australia’s John Carrington and the only female MP among the top 30 Australian law firms, Sharon Cook from Henry Davis York.
“I think it’s been a great year for Freehills. A lot of things happening, both in the work we’re doing for clients with people inside, but also with the merger ... so an exciting year,” Bell said at the 2012 Lawyers Weekly Australian Law Awards, proudly sponsored by List A Barristers.
Bell helped Freehills’ revenue break through the half billion dollar mark for the first time last financial year (F/Y); growing it about seven per cent to reach $511 million.
During the GFC, Freehills did not make any lawyer redundancies, and this F/Y introduced an ‘uncapped’ bonus scheme for its lawyers.
It was also the first law firm to introduce 18 weeks’ paid parental leave for all permanent staff, setting a standard for the profession in relation to diversity. Bell played a large part in this through his role on the Freehills Diversity Program board.
Bell has also led Freehills’ response to a globalising legal market, leading negotiations with UK-based international firm Herbert Smith ahead of the firms’ merger on October 1 this year. The merger is a full equity merger, with partners across 20 offices to share in a single profit pool. If it goes ahead, the merged firm will rank as one of the largest in the world.
Bell has also made an important contribution to public discussions in Australian business, participating in the Business Council of Australia policy committee for Labour Market Skills & Education.
He was also recently appointed to the board of the Australian Indigenous Minority Supplier Council and can be credited for overseeing Freehills’ indigenous students’ pathways program.
Bell received the Managing Partner award from Randstad CEO Paul Cowling (pictured right).
Going global a credit to Freehills MP