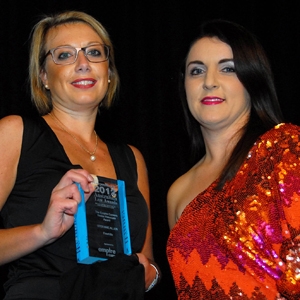 Freehills’ Stefanie Allen, the winner of the Empire Careers Senior Associate Award at the 2012 Lawyers Weekly Australian Law Awards, proudly sponsored by List A Barristers, has been praised by Freehills partner Rodd Levy as “among the best lawyers I have worked with in my 28 years as a lawyer”.

> Freehills’ Stefanie Allen, the winner of the Empire Careers Senior Associate Award, has been praised by Freehills partner Rodd Levy as “among the best lawyers I have worked with in my 28 years as a lawyer”.
She has also been commended by clients for her expertise and professionalism.
Bob Santamaria, group general counsel at ANZ, went so far as to describe Allen’s performance as “simply extraordinary”.
“She mastered the most complex set of existing arrangements, she negotiated new agreements ... and constantly picked up and solved the most complex problems,” he said.
Allen was a key part of the Freehills team advising ANZ bank and PPB Advisory in relation to the Burrup group, including the sale of a 65 per cent shareholding of Burrup Holdings, whose assets include a billion-dollar liquid ammonia plant located on the Burrup Peninsula. Through her work on the matter, Allen enhanced the profile of the Freehills M&A team and further consolidated the firm’s relationship with ANZ.
“The best thing I’ve learnt is to really love what you do and get to know your clients and the way they’d like you to operate, " said Allen, at the 2012 Lawyers Weekly Australian Law Awards.
The past year has also seen Allen work on a number of the firm’s largest and most complex matters in the M&A space. Both colleagues and clients have relied on her deep understanding of the issues and ability to suggest solutions to problems, one of a long list of award-worthy achievements.
Apart from client work, Allen also contributes to marketing and business development activities of the corporate group at Freehills, including preparing and delivering workshops and training programs for clients.
Allen accepted the Senior Associate Award from Empire Careers’ managing partner Michelle Sneesby (pictured right).
When ‘extraordinary’ service meets M&A savvy