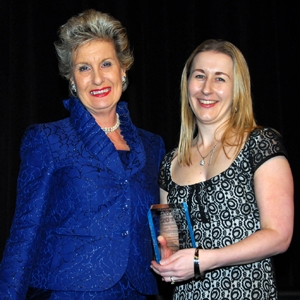 An engaged workforce and the use of social media in recruitment campaigns gave Anne Reeves the edge as she emerged as the winner of the Allied Recruitment Solutions Talent Manager Award.

> An engaged workforce and the use of social media in recruitment campaigns gave Anne Reeves the edge as she emerged as the winner of the Allied Recruitment Solutions Talent Manager Award at the 2012 Lawyers Weekly Australian Law Awards, proudly sponsored by List A Barristers.
Reeves is the HR general manager at Maurice Blackburn. When she first came to the firm in January 2007 she joined an existing HR team of two. She now leads a team of 11 people, including a specialist national learning and development group, national HR manager, HR managers, HR consultants and administrators, who support 700 people in almost 30 offices.
Under Reeve’s stewardship, Maurice Blackburn has grown not only in size as a firm, but this year it has recorded some of the highest staff engagement measurements in both the legal profession and other professional service industries nationally.
After introducing the independent AonHewitt Employee Engagement Survey as an annual measurement tool in 2011, Maurice Blackburn achieved a national employee engagement rating of 74 per cent in 2011 – well above the national average of 64 per cent for law firms.
Reeves has also overseen a transitioning of how the firm handles recruitment in the modern era. The uptake of e-recruitment tools such as LinkedIn and Facebook has increased to provide for around 45 per cent of how the firm attracts new recruits, and it is anticipated that this will reach up to 60 per cent over the coming 12 months.
Gender equality has also been a task that Reeves has tackled with gusto.  In 2008, Maurice Blackburn introduced a Gender Pay Equity Tool to address any inequity for women relating to salary and promotion.
Reeves has also had a major hand in the promotion of indigenous lawyers via sponsorship and graduate opportunities.
Reeves edged out Kate Weaver from DLA Piper and Andrew Plaskett from Clayton Utz to win this award.
Alicia McKenzie (pictured right) national human resource manager at Maurice Blackburn, accepted the Talent Manager Award on behalf of Anne Reeves from Allied Recruitment Solutions director Sharyl Walsh (pictured left).
The talented Ms Reeves