Home/
News/
The Price of success

The Price of success 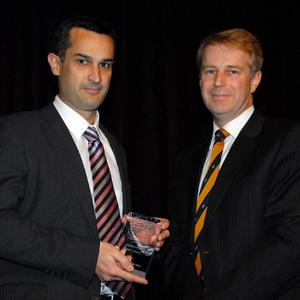 The judges simply had to look at the numbers to be reassured that Wotton + Kearney COO, Andrew Price, should be this year’s LexisNexis Practice Manager Award winner at the 2012 Lawyers Weekly Australian Law Awards, proudly sponsored by List A Barristers

iv> Price (pictured left) increased revenue for the insurance firm by 50 per cent in 2008-2009, 37 per cent in 2009-2010 and 24 per cent in 2010-2011, with another significant increase in revenue expected for 2011-2012.
He has been instrumental in building and managing growth in people, with a 36.4 per cent growth in lawyer numbers in 2011 earning the firm the title of fastest-growing law firm in Australia.
But success is not all about dollars and growth for Price. He developed a CSR and pro bono program called Community Footprint, and in 2012 W+K’s first pro bono coordinator started. The firm has doubled its pro bono budget under Price’s leadership.
One of the charitable initiatives of Community Footprint will see Price, along with five others from W+K, travel to Cambodia in November to build around 12 houses for underprivileged Cambodian families.
“Pro bono is very important for the lawyers; it’s important for our culture internally ... and law firm managing is a great way to really drive CSR and pro bono projects," said Price, after accepting the award.
Managing partner David Kearney commended Price on the program, which he believes “goes beyond the traditional concept of providing pro bono services”.
He also acknowledged Price’s commitment to sustainable practices and his role in reducing the firm’s environmental footprint.
Price said the award came as quite a suprise, especially “for a firm like Wotton + Kearney; we’re a lot smaller than the top-tier firms that were in the running”.
In addition to his role at W+K, Price assists in the development of other practice managers across NSW by sitting on the NSW committee of the Australian Legal Practice Management Association, including being responsible for NSW sponsorship.
Wotton + Kearney’s Andrew Price, winner of the Practice Manager Award, receives his trophy from LexisNexis’ Chris Cook (pictured right).
The Price of success