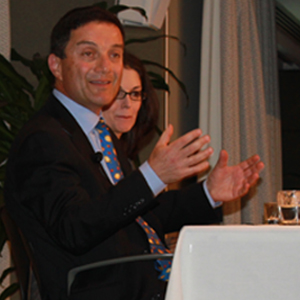 Difficulties in applying international humanitarian law to cyber attacks and targeted killings by drones were two subjects discussed last night at a seminar hosted by the Australian Red Cross and King & Wood Mallesons.

Professor of International Law Steven Freeland (pictured) and expert in drones and cyber warfare Dr Emily Crawford addressed a crowd of around 200 at PricewaterhouseCoopers’s offices in Sydney.

IHL, which was established under the Geneva and Hague Conventions to regulate the means and methods of warfare, was discussed in the context of both “traditional” armed conflict and 21st century warfare.

“The assumption in the law is that somebody would bash the other guy in the head and law is a reaction to the use of force,” said Freeland, as he asked the audience: who are the parties nowadays and what are the weapons?

“IHL principles are fundamental and they make a lot of sense,” said Freeland, but he added that the difficulty in applying them to drones, cyber warfare and space “is in the detail”.

“How does one apply principles of proportionality and discrimination to these different ways of fighting?”

Freeland urged policy and law makers not to rest on their laurels by “trying to fit a square peg into a round hole”.

Cyberspace presents both opportunities and risks in warfare, according to Freeland. More accurate weapons and greater intelligence can help minimise civilian casualties, but at the same time can lead combatants and decision makers to become morally disengaged from the end consequences of attacks.

US leading a global battlefield

Once restrained to the realms of science fiction, drone or unmanned aerial vehicle (UAV) killing is now becoming openly accepted as part of government policy.

Dr Crawford explained that only the US and Israel currently have advanced drone weapon capabilities, but that around 40 other countries in the world are acquiring drones and drone fleets.

UAV’s themselves are often based much closer to where targets are being attacked. The US has bases in Europe and Asia, while CIA drone pilots operate out of CIA headquarters in Langley and Virginia.

Crawford explained how the US, by conducting drone strikes against people in Yemen and Somalia, has created a “global battlefield”.

“In conducting strikes against targets considered to be outside the geographic bounds of the conflict … they’re going after people regardless of where they are in the world, regardless of whether what state they’re in is engaged in an armed conflict,” said Crawford.

“It’s about this individuating of the war down to the person rather than the state or even group. Anyone that pops up on a list can be targeted anywhere and anytime, regardless of whether they’re directly participating in hostilities at the time they’re being targeted; so people have been targeted while they’ve been asleep or when they’re receiving medical treatment.”

Targeted killings are permitted under IHL when the person being targeted can be considered a combatant or a civilian taking direct part in hostilities. While mechanisms around proportional use of force and collateral harm to civilians must still be considered, IHL as it applies to drone warfare raises all sorts of questions for lawyers.

The CIA is not part of the armed forces and intelligence agents are civilians, explained Crawford, as she warned of potential consequences under the law as it stands.

“CIA operatives are taking direct part in hostilities - even though US law criminalises civilian participation in armed conflict, but of course only of people who aren’t American - but civilians who take part in hostilities can be targeted for their war-like acts. You can only imagine the situation if a party adverse to the US were to start practising against the US what the US has been practising to everyone else,” said Crawford.

Numerous enforcement and accountability mechanisms also exist in IHL, but have fallen by the wayside when it comes to rapidly-advancing technologies.

“Just as the US and Israel have been silent about what criteria has been used for the selection of [drone] targets, so too are they silent about how, if ever, mistakes are addressed,” said Crawford.

In May this year, The New York Times revealed the extremely broad scope of drone-targeting criteria through leaks by Obama administration officials. All “military-aged males in a strike zone” are considered targets unless explicit intelligence posthumously proves them innocent.

One official said anyone in an area of known terrorist activity or found with an Al-Qaida operative is “probably up to no good”.

“I’m sure that’s terribly reassuring for the dead people to know that they’d be posthumously proven innocent,” remarked Crawford, adding that there is no way of knowing if the CIA is following through if mistakes are made, there is faulty data, pilot errors or genuine malfeasance.