Students in awe of Kirby 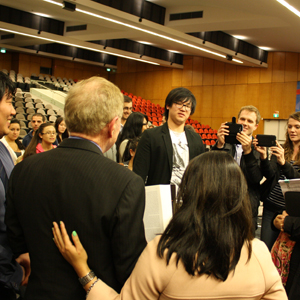 Retired High Court judge Michael Kirby delivered a public lecture last night and gave a rare, personal insight into his time on the bench for law students at the University of Western Sydney.

Kirby spoke for an hour to a lecture theatre holding more than 200 law students at UWS’ Parramatta campus, where he is adjunct professor at the School of Law.

The best perk of being a High Court judge and the thing he missed most, he said, was having two “brilliant young associates” working for him each year.

“Once I’d done my reasons … they would get it and they would hack it apart and work on it and criticise it and do so robustly,” said Kirby.

“Some of them sort of started by being so in awe of the great person that they wouldn’t do that but they soon got used to it. They got to enjoy it and that was useful to me.”

Students gathered in a drove around Kirby after the event, taking photos with the legendary jurist on smartphones and asking him for advice and tips for success.

In his address, Kirby explained the “nature of the enterprise” of the High Court, describing everything from his bright Tasmanian timber-panelled chambers in Canberra, to Murray Gleeson’s tendency never to eat the raisin toast provided by the chief justice after each case was heard.

He and Gleeson graduated together in 1962 from the University of Sydney, where Kirby said they shared the course load by attending classes for each other.

“[Murray suggested] ‘you will do some subjects and I’ll do others and that would mean you can sleep in on some days and I can on other days’. He tended to do the things that were of greatest interest to him, which were business-type law; I tended to do the big picture things like constitutional law, public law and jurisprudence and international law,” said Kirby, adding that those interests were reflected in each of their careers later on.

Kirby had to decide hundreds of special leave applications during his 13 years as a justice of the highest court of Australia and he described routines for getting through them.

Justices would “very, very rarely” disagree on special leave applications, he said, because they got to know what kinds of cases were suitable for special leave.

Issues considered included whether there was dissent in the court below, whether there was a lot of money or an important principle involved in the case, whether an apparent injustice could be seen in the outcome of the case and differences between different courts throughout Australia on the question of law.

“Please do not underestimate the significance of special leave,” Kirby urged the audience, “if you don’t get special leave in most cases you’re dead in the water, so getting special leave, getting through the gateway, is extremely important.”

It’s an extremely stressful and tense day for lawyers when they are seeking to get or oppose special leave, Kirby said. They get 20 minutes to argue and five minutes for reply before lights come on, warning that their time is up.

“Some unkind justices will stop the barristers in the middle of their sentences,” said Kirby, adding that the chief justice was known to lament the fact that he didn’t have a trapdoor to finish submissions the minute the time was up.

Kirby said he usually worked from 6.30am to 7.45pm, before walking home and having dinner with his long-term partner, Johan van Vloten.

During his service on the High Court he had various disagreements with other justices of the court but said he never doubted their honesty and integrity in deciding the case.

In his entire career as a judge he was never approached, via brown paper bag or ministerial phone call, by anyone endeavouring to corrupt his decision, he said.

Students in awe of Kirby