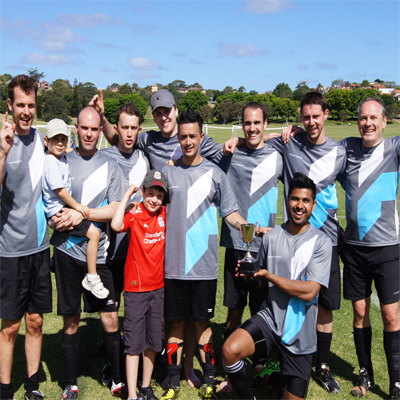 They were all vying for the ultimate legal footballing prize on Sunday 11 November at Centennial Park.

“We didn’t have much time for training in advance of the event so we are thrilled to have been victorious,” said property partner and team captain Richard Abbott. Team members included a mix of lawyers from the firm’s property, corporate and dispute resolution and litigation groups, as well as a member of the catering staff. Although they were champions on the day, they didn’t walk away from the game without some injuries – ranging from blisters to sunburn and sore knees.

Football Development Australia offered the opportunity for the law firms to play in the 2012 Law Firm Champions Cup soccer tournament and team-building event. The event was specifically planned as an inter-law-firm event.