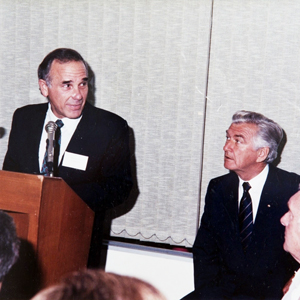 Having escaped the Holocaust as a child, Holding Redlich founder Peter Redlich AO vowed to “fight for the underdog” and openly supported the Labor Party up until his death from a heart condition earlier this month.

Having escaped the Holocaust as a child, Holding Redlich founder Peter Redlich AO vowed to “fight for the underdog” and openly supported the Labor Party right up until his death from a heart condition earlier this month (3 January).

Lou Farinotti, managing partner of the firm’s Melbourne office, paid tribute to Redlich at his funeral. He told Lawyers Weekly that the staunch Labor supporter (pictured left in 1991 with former prime minister Bob Hawke) was highly respected by the firm’s lawyers, even those with opposing political views.

“He was absolutely open about [his political views] but he didn’t ram it down people’s throats,” said Farinotti, pointing out that Redlich held the role of Victorian branch president of the ALP in the 1970s.

“Labor’s attitude to politics was in line with his attitude to life ... he saw the party as having the interests of the ‘battler’ group at its heart rather than the high end of town.”

This sense of social responsibility can be traced back to Redlich’s childhood in Vienna, Austria. When his parents’ business was confiscated under the Aryanisation laws, Nazi lieutenant colonel Adolph Eichmann – one of the main organisers of the Holocaust – tipped off the Redlich family to leave the country.

“The Holocaust fundamentally changed his attitude to a lot of things and that’s where his social justice and human rights passion came from,” Farinotti said.

A career in the law provided ample opportunity to “fight for the underdog”, a phrase Redlich often used. Since its establishment in 1975, Holding Redlich has worked for the Tampa boat people, the Wilderness Society and members of the ‘stolen generation’. Redlich also personally acted for conscientious objectors to the Vietnam War.

But Redlich was also a practical man who wanted to build a successful national law firm. This pursuit was often at the forefront of his mind, even in social settings.

“His family was very important to him and he enjoyed time away from the office, but a lot of the discussions, even socially, would end up becoming about work,” Farinotti revealed.

During these conversations, Redlich would test himself to come up with ideas to grow the firm; he was also known for testing potential candidates. Farinotti explained that Redlich would fire questions at interviewees to test their ability to cope under pressure, which left many looking “shell-shocked, as though they’d been put through a ringer”.

Direct in criticism and in praise, Farinotti sums up Redlich’s leadership style as “tough but fair”.

Over his 40-year-long legal career, Redlich has also been the Chair of the Victorian Arts Centre, the TAB and Film Victoria; a director of the Australian Industry Development Corporation and Telstra, and a member of the Monash University Council.

He received the Order of Australia for his services to the law, politics and the community in 1992.

Last Updated: 26 January 2013 Published: 25 January 2013
Do you know remarkable women in the legal industry leading the charge? Recognise these women as role models for the future female leaders in law, by nominating them for the Women in Law Awards 2021. Not only will you be showcasing their achievements and propelling their career, you will also be taking the first step in giving them the recognition they deserve.
Visit womeninlaw.com.au