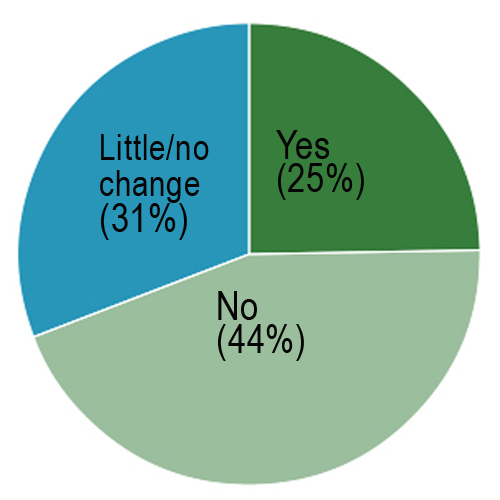 A Lawyers Weekly poll has found that most voters believe the legal recruitment market will not improve in 2013.

A Lawyers Weekly poll has found that most voters believe the legal recruitment market will not improve in 2013.

The poll, which closed today (29 January) with 360 responses, saw 44 per cent vote no, 25 per cent vote yes and 31 per cent vote that there would be little or no change when asked: “Will the legal recruitment market improve in 2013?”

Managing partner of Colin Biggers & Paisley (CBP), Dunstan de Souza, said he wasn’t surprised by the result. He offered a number of reasons as to why he suspects law firms are going to struggle in the coming year.

“The pressure on legal fees in big corporations; slowing M&A people not litigating as much as they might’ve otherwise …it’s just one of those relatively low points in the cycle for law firms,” he told Lawyer s Weekly.

“Part of it is actually structural change. These changes are quite permanent: you’ve got in-house teams that are growing and getting pressure to keep some of the work in-house and you’ve got a marketplace that doesn’t want to pay any legal fees.”

Sharon Henderson, a partner at Legal People and recruiter in the industry for 12 years, said it is definitely a slower market compared to this time last year, but that recruitment will increase in the new financial year.

“That’s the indication we’ve seen in the Melbourne market. Certainly from our clients, particularly our larger ones, they’ve now had the opportunity to bed down a lot of the merger activity that they’ve gone through last year and the year before,” she said.

In December, Lawyers Weekly reported that Ashurst had joined top-tier rivals Clayton Utz in rolling out redundancies before the end of 2012.

A spokesperson from Ashurst said it was a challenging market and that the firm was responding to prevailing economic conditions “like all prudent businesses”.

Even for CBP, which last year was the fastest-growing law firm by headcount (among the major firms), according to de Souza, it will be a tough year economically.

CBP opened in Melbourne seven months ago when it merged with boutique insurance firm Monahan + Rowell. De Souza said CBP was “likely to do something” in Brisbane in the next few months as well as recruit significantly in its target areas of construction, insurance, property and commercial litigation along the eastern seaboard.

Despite CBP’s aggressive growth strategy this year, de Souza said its lawyers have to “fix themselves as part of the solution”, before setting out to recruit.

“One of my practice groups [last week] wanted to recruit and I said ‘no, being a tough year you’re going to have to find other ways of doing this’,” said de Souza.

“All law firms tend to have bits of inefficiency within them, which are just tolerated for historical reasons. People’s performance might have been not up to scratch and we’ve just tolerated that and we still recruit because we need help,” he said.

As law firms have grown from small partnerships to much larger corporate entities, they have become more professional in the way they are managed, said de Souza, but there is still a way to go.

“Law firms in the past have been successful despite themselves but I don’t think they can afford to do that anymore. They need to be more professional about how they do things and that makes it tough for people who might have found a home in the system previously; there might not be a home for such people in the future,” he said.